Most Americans still favour separation of church and state 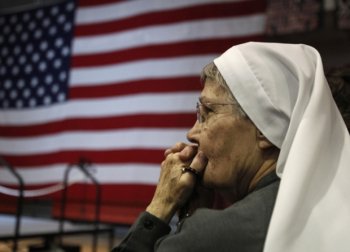 A nationwide YouGov poll for the Huffington Post in the United Stated shows that one-third of respondents would like to see Christianity as the state religion.

According to the polling of 1,000 people, 32% of adults said they would support a constitutional amendment that makes Christianity the official religion of the United States, with 52% preferring to keep church and state separated. On a more local scale, 34% would like to see Christianity as the official state religion in their own state, while 47% oppose such an idea.

However, despite one-third of voters expressing support for a state religion, not many think there is any real possibility of church and state uniting: only 11% said they thought the US Constitution would allow states to adopt a state religion. 58% believed such a move would be unconstitutional, while 31% said they were not sure.

Voters were probably correct in their assessment of how realistic a state religion is: according to the US Supreme Court, the First Amendment prevents the government from establishing an official religion. The ruling also applies to states.

The poll was sparked by an attempt earlier this month by the North Carolina House of Representatives to pass legislation that would have made it possible to introduce an official state religion. The Bill was rejected.

In the Yougov poll, Democrats were less likely to vote for an amendment proposing the combining of church and state. 46% of Democrats voted against the concept, while 55% of Republicans said they would favour a national constitutional amendment.