Is this a true history of religious education or a rewriting of the facts? 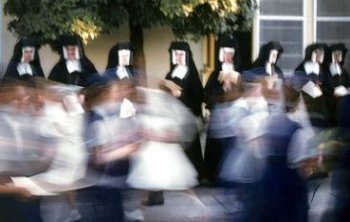 Secularists and humanists in the 1960s and 1970s played a critical role in stopping religious education in schools being used for proselytising. That's the claim being made in new research from the University of Exeter.

A report by academics claims that secularist groups had a profound influence on how religious education developed against pressures from faith groups and educators.

Researchers at the university with partners from the University of Worcester discovered that the National Secular Society and the BHA allegedly attempted to marginalise Christianity from the life and curriculum of state-maintained schools. The report also outlined how Christians and religious educators of the time apparently actively cooperated with these groups and invited discussions with secularists.

Lead author Dr Rob Freathy said: "Our research does not simply portray an ideological war between competing groups struggling to control children's minds. Instead, we've unearthed a much more complicated story characterised as much by compromise and conciliation as it is by contestation and conflict."

During the 1960s and 1970s, the term "religious studies" became more commonplace. At this time the secularist movement was focussing on abolishing or reforming the daily act of worship – a move that has popular support.

Although the groups failed to change the 1944 Education Act, they managed to alter the aim of religious education away from trying to convert people and more towards recognising other religions and no religion as legitimate fields of study.

Researchers found that Christians and secularists entered into discussions about how the subject could be developed to make it suitable for pupils and teachers regardless of their beliefs.

Dr Freathy admitted he was surprised by the extent of the collaboration between Christians and secularists as he was by the non-religious lobbying.

He said: "Many Christians and secularists worked together both informally and through official processes to develop multi-faith forms of religious education which would be suitable for all pupils and teachers regardless of their religious or secular backgrounds. Through such collaborative efforts humanists had a direct influence on the development of the form of religious education we see in schools today."

In the 1950s, the majority of the population were nominally affiliated to one of the Christian denominations, while the Church remained a highly influential institution in national and social life.

By the end of the 1960s the Church faced severe difficulties in the recruitment and retention of clergy, alongside a significant fall in the number of people calling themselves Christian and a big shift from the Christian identity of the country.

Bill McIlroy, who was secretary of the NSS during this period, observed: "The authors deal specifically, but not exclusively, with campaigns organised by the National Secular Society in the early 1960s. It was an uphill struggle. The Society had for long been in a state of decline. It was too lethargic even to take advantage of Margaret Knight's two broadcasts on "Morals Without Religion", which had engendered considerable interest.

"The tide turned in 1963 when David Tribe was elected President. Significantly, he announced that the issue of secular education was number one priority because the entire school system had become a vehicle for Christian indoctrination. So instead of open-air meetings at Hyde Park and Tower Hill, the NSS started using press releases, letters to newspapers, articles and a wide range of leaflets on social questions, written mainly by David Tribe. Public figures, including Members of parliament, openly supported and endorsed the Society's campaigns."

Terry Sanderson, President of the National Secular Society at the moment, said: "I think this report probably overstates the influence that secular and humanist groups had on the process of change. The public and political mood at that time was in our favour, and it was a period of general societal reform. In some ways we now seem to be going backwards as religious schools proliferate and become increasingly evangelical in nature. Religious Education is becoming once more just a platform for proselytising in so many schools. And even now, nearly seventy years after the Education Act came into effect, forced worship is still the law in every school in the land."

Mr Sanderson said that "perhaps the academics should now undertake research into the way that Religious Education is reverting to religious instruction with, apparently, the consent of the Government."