Prominent NSS supporters exercise their right to freedom of speech 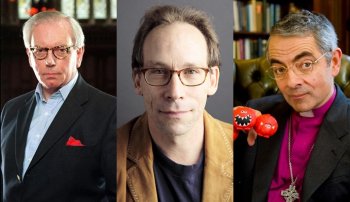 Last week new NSS honorary associate Professor Lawrence Krauss caused controversy when he threatened to walk out of a UCL debate with a Muslim group because the audience had been sexually segregated.

Afterwards he told the Daily Telegraph that the incident highlights a wider problem: many British people are too afraid to challenge "a vocal and aggressive" section of the Muslim community. The former advisor to President Obama said Britons were often "cowed" by those eager to protest whenever they felt "their cultural norms are not being met".

He told the Telegraph: "People are not only afraid to offend, but afraid to offend a vocal and aggressive group of people. There is a segment of the Islamic community that is very vocal about this."

Another honorary associate, historian Dr David Starkey, upset some Catholics when he said on Radio 4 that the Catholic Church is "irredeemably corrupt from top to bottom".

In an outspoken attack, Dr Starkey said the election of a new Pope was simply "theatre" which would mean nothing to those outside the faith. He was speaking on the programme Broadcasting House on Sunday in a discussion with Eamon Duffy, Professor of the History of Christianity at the University of Cambridge, about the election of the new pope.

Professor Duffy responded by saying Christians do not believe that anything is irredeemable.

When asked what the new Pope meant for non-Catholics inBritain, Dr Starkey replied: "Nothing at all. It is simply part of the great world theatre of entertainment. It is up one minute with a new papal election and down the next with the next lot of revelations about the turpitude of the clergy."

He risked further offence by claiming that Thomas Becket, the murdered medieval Archbishop venerated as a saint by many Catholics, should be the "patron saint of child abusers".

The main scandals within the Catholic Church occurred in areas such as Ireland and America where they acted "outside the law" – as King Henry II accused the Archbishop of Canterbury Thomas Becket of doing in the 12th Century, prior to his killing.

Dr Starkey said: "I want to have a new patron saint. I want to declare that Thomas Becket is the patron saint of child abusers."

When asked if he wanted to respond to the claims, Professor Duffy, a Catholic, replied: "Well, no."

Dr Starkey is widely regarded as one of Britain's leading constitutional historians, and has presented series for Channel 4 and the BBC. He is to host a new series on how the British monarchy has influenced classical music for the BBC this year to mark the anniversary of the Queen's coronation.

Meanwhile, the comedian Rowan Atkinson, who has been prominent in NSS campaigns on free speech, got himself into trouble with an irreverent sketch on the BBC's Comic Relief night last week. The sketch — where he appeared as a fictionalised new Archbishop of Canterbury — generated 2,133 complaints to the BBC and 400 to the media regulator Ofcom.

The Atkinson sketch featured his Archbishop of Canterbury character — or "Arch" as he styled himself — underlining that he was not gay, using the phrase "arsing about" and the word "shagging", and comparing One Direction to Jesus' disciples.

The piece was pre-recorded on a studio set but was played out to the live audience at BBC Television Centre, who audibly gasped at the line: "Keep on praying – it doesn't work, but it's a good part of a getting-to-sleep routine if you've got insomnia."

The BBC has not included the sketch in its iPlayer compilation of Comic Relief highlights, and has issued this statement: "Comic Relief night features seven hours of live television and is known for pushing at the boundaries of comedy alongside heartfelt appeal films. It is made for a varied and wide-ranging audience, so getting the language, tone and content of the evening is extremely important to us… to any viewers we may have offended, we apologise.

"Rowan is well known for his comedy characters and this was an affectionate portrayal of an Archbishop figure, which was intended to amuse and entertain. We did not mean to cause any offence."