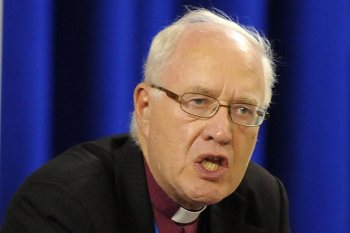 Writing in the Daily Mail, the former archbishop of Canterbury said it was "a bit rich" for the prime minister to tell religious leaders to oppose secularisation, and accused the government of "aiding and abetting" 'aggressive' secularism in its approach to same-sex marriage.

Citing a ComRes survey of just 535 churchgoers, which suggested that two-thirds of Christians felt they were a persecuted minority, Lord Carey said: "The Prime Minister has done more than any other recent political leader to feed these anxieties."

"Nothing in the proposed same-sex marriage legislation requires Christians to conduct or partake in same sex marriage, and Lord Carey has no right to insist that his discriminatory and intolerant views should prevail over those of the public and Parliament. And, rightly, they will not be allowed to.

"The survey referred to in the Daily Mail is a very small self selecting one. The more representative and independent polls show public support for equal marriage, including among Christians in the pews.

"Christians are far from being "marginalised" in this country. The UK is the only country in the world to give bishops the right to sit in its parliament, and England and Wales are the only countries where a daily act of Christian worship is a legal requirement in every state school. These unjustifiable privileges remain despite precipitously declining support, as shown by church congregations declining and ageing for many decades, which continued under Lord Carey's own poor leadership.

"Historically, gay people's lives have been blighted, and indeed ended, by the Church. Dr Carey is determined to continue persecuting them. Mr Cameron should be praised for helping to bring this persecution to an end.

"The UK is a diverse country, and a secular political system is the best chance we have to create a society in which people of all faiths and none can live together fairly and peacefully. There is nothing "aggressive" about this approach. Those practicing religion should show tolerance and more understanding of secularism and recognise the benefits that go with living in a secular society."