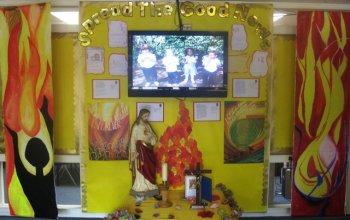 A report by the All Party Parliamentary Group on Religious Education (APPG) has found that RE lessons are frequently taught by teachers with no qualifications in the subject, and is calling for more resources to be put into RE teaching and for the subject to be included in the new Ebacc.

The group has received funding from the Religious Education Council whose stated aim is "To promote high quality teaching, learning and assessment in RE; to influence the development of public policy and public understanding of RE; and to promote a coherent professional development strategy for RE."

The APPG also has on it some of Parliament's highest profile Christians, such as the evangelical Fiona Bruce and Jim Dobbin, Mary Glindon who is anti-abortion and anti-gay marriage, the Bishop of Oxford, who is the CofE's education spokesperson and chief proponent of religious propaganda in schools.

The APPG, which aims to 'strengthen the provision of RE in schools' says the teaching of RE is often given to teaching assistants, who, they claim, receive little support, training or guidance. The report suggested that about a half of primary teachers and trainee teachers lack confidence in teaching RE.

The Rev Jan Ainsworth, the Church of England's Chief Education Officer, said: "This provides strong evidence for our continuing concern that RE is being downgraded as part of the curriculum.

Chair of the APPG on RE, Stephen Lloyd MP, said he thought "as many children as possible" should be encouraged to study GCSE Religious Studies, but warned: "It is illogical to think that we can dilute the professionalism and expertise needed to teach RE well and still have a generation of young people that understand and are sensitive to the growing levels of religious and non-religious diversity in our society."

RE is compulsory in all maintained schools, but not as part of the National Curriculum. Uniquely, the RE syllabus is determined locally by committees (SACREs), often dominated by religious interests. Many faith schools are also permitted to teach RE from a confessional viewpoint.

The National secular Society has called for radical reform of RE before any more resources are poured into it.

Stephen Evans, campaigns manager at the National Secular Society, commented: "There is a clear agenda behind moves to 'strengthen' RE that seeks to use schools as a place to promote religious belief generally. This parliamentary group appears to be part of a pincer movement with the CofE to pressurise the Government to strengthen the presence of religion in schools.

"Those for whom religion is personally important have a tendency to overstate the importance of RE – particularly when claiming how 'vital' it is to community cohesion. Cohesion is best served by children and young people recognising shared values and what they hold in common. A focus on citizenship rather than religion is the most sensible way of achieving this.

"It's time we abolished the whole concept of 'Religious Education' which ring fences religious beliefs for special treatment in schools, and can too easily morph into proselytization. Instead we should absorb education about religion into a much broader 'philosophy, ethics and citizenship' subject that covers the whole history of ideas that have motivated and continue to motivate people, including secular and non-religious ones. Religion would still be there, but it would take its place amongst other ways of making sense of the world."

Read the APPG report: RE: the truth unmasked (pdf)