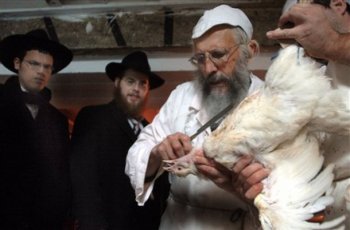 The National Secular Society has called on the Government to consider mandatory labelling of meat from religious slaughter as part of its response to the horse meat scandal.

Environment Secretary Owen Paterson MP recently called on the European Commission to 'accelerate' its recommendations on labelling the origin of all processed meat, stressing consumers should have confidence in what they're buying.

Animal welfare legislation requires animals to be stunned before slaughter in order to minimise suffering. The only exemption is for religious communities to meet Jewish and Muslim religious requirements.

At present, meat from non-stun religious slaughter methods routinely enter the general food chain. The National Secular Society has argued that this is both ethically unacceptable and potentially unlawful.

NSS campaigns manager Stephen Evans has written to both the Food Standards Agency (FSA) and the Secretary of State for the Environment, Food and Rural Affairs, Rt Hon Owen Paterson MP, seeking assurances that the rights of consumers who wish to avoid meat from animals killed under the religious exemption are also properly considered when considering labelling of meat products.

Stephen Evans said: "Current legislation supposedly restricts meat from religious slaughter to the food of religious communities, but this targeting of supply is simply not enforced, leaving consumers hoodwinked into subsidising the religious slaughter business – whether they like it or not.

"It therefore seems appropriate and reasonable to consider the impact on consumers in this regard, a significant number of whom would be alarmed to find that simply not buying or eating labelled halal and kosher meat does not mean that they have avoided meat from non-stun slaughter.