New poll shows religious leaders out of step with the nation 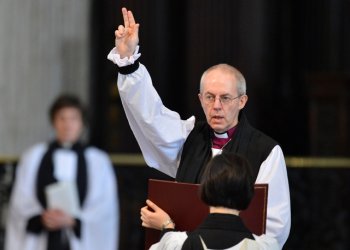 A new Yougov poll for the Sunday Times finds that the nation is split down the middle on the issue of whether it is appropriate for clergypeople to get involved in politics. Of the 1,918 people questioned, 70% said they had no religious affiliation.

In answer to the question "Do you think it is right or wrong for Bishops and senior clergyman to comment on political issues and government policies?" 44% of respondents thought it was right while 43% thought it was wrong. 13% didn't know.

In response to the question "In the last decade the Catholic church has faced a series of scandals about historical child abuse by priests. Since these stories emerged, how well or badly do you think the Catholic church have dealt with the issue and taken action to prevent it happening again?" 79% thought the Church had handled it badly, while 7% thought they had dealt with it well. (Catholics were most likely to think they had dealt with it well (27%) and those of no religion least likely (4%)).

The new Archbishop of Canterbury, Justin Welby, doesn't get much support for his opinions, either. When asked "Do you think the new Archbishop of Canterbury Justin Welby is right or wrong to say that sex outside marriage is wrong?" only 17% said he was right and 69% said that he was wrong to do so. There was a remarkably similar response across all ages, regions, genders socio-economic groups, except for the religious – who were less condemnatory. But even a majority of them thought him wrong, except for "Other Christians", only 37% of whom thought him wrong.

Sixty-one per cent of respondents think the Church of England is "out of touch" with only 21% thinking it is "in touch". The Catholic Church fares even worse, with 77% saying it is "out of touch" and only 10% saying it is "in touch". Unsurprisingly, those of no religion were the most critical, but those identifying as religious were pretty unflattering about their own churches. A whopping 59% of Catholics thought their own church "out of touch", compared with 34% that thought it "in touch" – something politicians should bear in mind when being pressurised. Only a narrow majority (45% v. 43%) of Anglicans thought their Church "in touch".