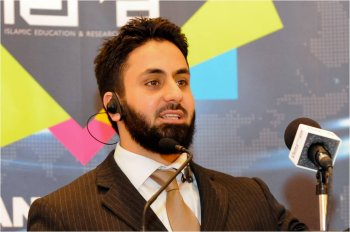 An organisation known as the Islamic Education and Research Academy (IERA) has been banned from holding any events on University College London premises after attempting to impose a policy of sexual segregation at one of its events.

The event, a debate entitled "Islam vs Atheism" on Saturday 9 March, pitted the controversial public speaker Hamza Andreas Tzortzis (right) against theoretical physicist and cosmologist Professor Laurence Krauss. Professor Kraus, an NSS honorary associate, said he had been told in advance that there would be no segregation, and that people could sit wherever they wanted. Despite these assurances, segregation was enforced on the night. Only when Professor Krauss intervened and threatened to leave did organisers relent.

A full account of the event can be read here.

UCL launched an immediate investigation and swiftly issued a statement confirming the group would be prevented from holding future events at the University. The statement concluded: "Given IERA's original intentions for a segregated audience we have concluded that their interests are contrary to UCL's ethos and that we should not allow any further events involving them to take place on UCL premises.

In a further statement, issued via the Provost's newsletter, UCL clarified:

"UCL was founded in 1826 as a secular institution. That does not mean it is institutionally atheist but that it is an open institution, tolerant of difference, strong on of freedom of speech, but intolerant of discrimination on grounds of gender, race, religion or other irrelevant grounds. There is no shortage of other premises available in London to organisations wishing to operate to different rules."

University College London is celebrated as an early haven of enlightened free thinking, the first university college in England to have a secular foundation, and the first to admit men and women on equal terms.

The debate at UCL was part of Hamza Andreas Tzortzis' ongoing tour of universities in the UK as part of an 'Islam awareness' initiative.