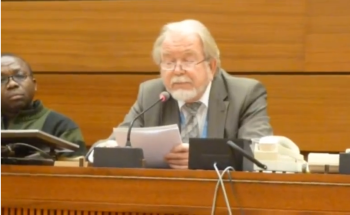 International Ethical and Humanist Union representative Roy Brown has again reminded Islamic States of their responsibility to uphold the right to freedom of expression.

Mr Brown delivered the below statement this week at the 22nd regular session of the Human Rights Council in Geneva.

Freedom of Expression and the OIC

Freedom of expression is once again under sustained attack from the member states of the OIC: In Saudi Arabia last week, two activists were sentenced to ten years in jail for exposing hundreds of cases of human rights abuse in the kingdom.

In Iran, we have seen protesters imprisoned and even sentenced to death, for "waging war against God". But what strange logic can possibly equate criticism and peaceful protest with waging war? And since when did any government equate itself with God?

In Morocco, a colleague has had to flee for his life because he wrote of his doubts about Islam.

In Mauritania, last Saturday, a group of nine antislavery protesters were attacked and severely beaten by police.

In Pakistan, hundreds of Shias have been murdered for holding the "wrong" beliefs.

But we have waited in vain for condemnation by the OIC of human rights abuses carried out by agents of the State within its member States. Instead, we have seen protests against Islamic extremism condemned as "Islamophobia", which was recently described by the prime minister of Turkey as "a crime against humanity".

It is people that have human rights, Mr President, not beliefs. Protesting against human rights abuse, and pointing out where the responsibility lies, is not a crime, it is a duty. And it is the duty of every member state of this Council to uphold the right to freedom of expression, not condemn it.

Also see: More work from the IHEU team in Geneva:
Iran admits torture following pressure from IHEU at the UN
"Why must I be killed?" asks Moroccan atheist