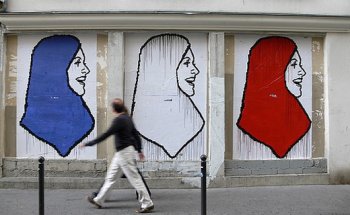 France's top court ruled on Tuesday that a Muslim woman who was sacked for wearing the Islamic headscarf at work was unfairly dismissed on the basis of her religion.

overturned an earlier ruling by an appeal court in Versailles which had upheld the right of her employer to dismiss the woman after she refused to remove her headscarf.

Any overt religious symbols — headscarves, Jewish skullcaps or Sikh turbans for example — are banned from French state schools, which operate on strictly secular lines. The woman in question was working at a privately-run crèche, so the court ruled that the law did not apply in this case and that her civil right to express her religion prevailed.

Interior Minister Manuel Valls told parliament that the court's ruling was regrettable on the grounds that it "calls into question the principle of secular education."

The crèche had defended the dismissal on the basis of its own internal rules which required employees to be neutral in matters of philosophy, politics and faith.

France has since banned the wearing of niqabs — veils which cover the full face — in public but that controversial legislation would have had no bearing on this case.