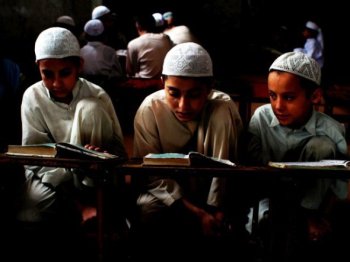 An attempt is being made in Bradford to safeguard the estimated 9,000 children who attend Muslim religious schools in the city. But the National Secular Society says it is not enough and that a legal framework is urgently needed to control the network of madrassas.

Bradford Council for Mosques, Bradford Safeguarding Children Board, NSPCC, and West Yorkshire Police worked together over the last 12 months to produce Children Do Matter. The study looks at issues including child protection, staff recruitment, bad practice and child abuse.

The usual spin is put on the value of madrassas, the so-called "schools" that indoctrinate children in Islamic teachings (for instance, Kath Tunstall, Strategic Director of Children's Services in Bradford, writes: "Masajid and Madaaris play a significant role in promoting the spiritual and social development of children, enhancing their self-esteem and positive identity.").

But there is no escaping the fact that these institutions are unregulated, secretive and often provide cover for child abuse.

There have been several cases over the last few years that have reached the courts of children being beaten and sexually abused in madrassas and as alarm begins to grow about what is going on behind the closed doors of these places, the Muslim community is gradually coming to realise that it cannot simply disregard the law in relation to the treatment of children.

The report admits that madrassas vary in quality and care ("There is no uniformity or consistency", it says). Some are run in multi-million pound complexes, others in private homes. The teachers are mostly unqualified volunteers. Some give a good quality religious education, others simply force the children to learn the Koran by rote, often using physical punishment to reinforce the indoctrination.

None have any outside regulation.

The report admits: "There is an apparent level of secrecy surrounding the running of Masajid and Madaaris due to negative representations of Muslims and Islam in the media. This is not to suggest that there is anything wrong or sinister about them but this level of 'closeness' does give rise to suspicion and hinders wider community engagement."

It also admits that employment procedures and health and safety considerations are sometimes "minimal": some of these places "tend to be satisfied by a minimalist approach to ensuring proper policies, procedures and practice are in place."

This poses considerable difficulty for children who access mainstream education in English and with very basic or no command of their mother tongue or that of the teacher.

Teachers who have no or very little command of English also tend to have least understanding of safeguarding issues, legal requirements or of the responsibilities that impact on their role. They also tend to practice the traditional methods of teaching/ discipline.

More than often, Faith teachers in Madaaris are employed for their knowledge of the faith and not for their teaching skills.

Mohammed Rafiq Sehgal, the senior vice-president of Council For Mosques Bradford and the chairman of its safeguarding working group, said: "The report is an uncompromising and honest account. I hope that messages and suggestion contained in the report will be taken seriously and acted upon by those concerned."

The study was started in 2011, after religious teacher Sabir Hussain, 60, was sentenced to ten weeks in prison for assaulting pupils at the Markazi Jamia Mosque in Lawkholme, Keighley.

The key conclusions of the report include:

Terry Sanderson, president of the National Secular Society, said: "Reports like this are all very well and I'm sure full of good intentions, but the Muslim community cannot be permitted to go its own way and remain unregulated in areas where others are forced to act within the law. It is not good enough that these 'schools' are allowed to be so secretive and that there is no legal framework in which they must operate. Children are entitled to better than that. It is their safety and their welfare that must come first, not the desire of community leaders to simply indoctrinate them."