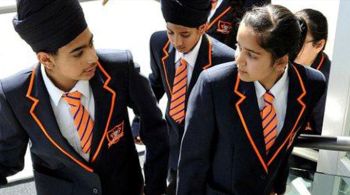 Local residents have reacted angrily to plans to open a new Sikh faith academy school in a Buckinghamshire village.

Concerns centre on proposals from Slough Sikh Education Trust [SSET] to open a new 840-pupil Secondary Academy in the village of Stoke Poges.

The proposed Khalsa Secondary Academy's admissions policy states that up to 50% of the places will be allocated on the basis of Sikh faith and all remaining places will be allocated to children of other faiths or no faith. However, local residents have argued that the school's recruitment drive has focused exclusively on Sikh communities in neighbouring Slough, Southall and Harrow and is therefore expected to open with at least 90% of pupils from a Sikh background in the first year's intake.

Local residents are concerned that the village does not have the adequate infrastructure to deal with additional traffic that will occur when pupils are bussed in from surrounding areas.

Local parents have also raised concerns that as the school will become the catchment school for the South Bucks area, families who choose not to send their children to the 'faith' school will lose their paid-for home to school transport.

Nick Kandola, chair of SSET, says his organisation looked at a number of potential sites within Slough, but none were considered viable by council planners or Trust members.

Stephen Evans, campaigns manager at the National Secular Society, said: "One of the problems with faith schools is that rather than attending their local school, schoolchildren are increasingly being segregated by the religious beliefs of their parents and then bussed around to the nearest 'faith' school that matches that belief.

"With regard to this specific proposal, we are particularly concerned that parents not wanting to educate their children at a school with a distinctive Sikh ethos could be financially penalised by the local authority by denying them assistance with home to school transport costs. This is yet another example of how the faith school system can disadvantage the non-religious and those of other faiths."

More than 400 Stoke Poges residents attended a recent meeting in the village hall pledging to fight the plans. A Facebook group set up to coordinate opposition to the new school now has over 950 members.

A public consultation concerning the proposal closes on Friday 15 February 2013.