Shortlist announced for Secularist of the Year 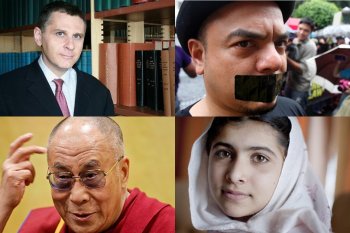 The shortlist has been announced for this year's Irwin Prize for Secularist of the Year.

The award is presented annually in recognition of an individual or an organisation considered to have made an outstanding contribution to the secular cause.

This year's prize will be presented by Michael Cashman MEP, CBE on Saturday 23 March at a lunchtime event in central London.

Nominations for Secularist of the Year are made by members and supporters of the National Secular Society; the winner is chosen by the NSS along with Michael Irwin, the sponsor of the award. Previous prize winners have included former MP Evan Harris, Lord Avebury, Maryam Namazie, Southall Black Sisters, Sophie in 't Veld MEP and Peter Tatchell.

This year's shortlist is:

Jacque Berlinerblau – for his book How to be secular: A call to arms for religious freedom and for broadening the appeal of secularism by dispelling the misconception that it synonymous with atheism.

British Muslims for a Secular Democracy – for raising awareness within British Muslims and the wider public, of democracy – particularly 'secular democracy', helping to contribute to a shared vision of citizenship.

Carlos Celdran – Performance artist and political/cultural activist in the Philippines, for his tireless challenges to the privileged Catholic Church there, particularly in his advocacy for gay health and freedom, and for the Responsible Parenthood and Reproductive Health Act of 2012 which guarantees universal access to methods of contraception, fertility control, sexual education, and maternal care – long opposed by the Catholic church.

The Dalai Lama – for his promotion of secular ethics beyond religion and respect for nonbelievers globally.

Oliver Kamm – Leader writer and columnist for The Times, for his regular and excellent defence of the separation of Church and State.

Malala Yousafzai – for campaigning for girls' education in the face of violent and brutal Islamist opposition.

Tickets for this year's event are still available, price £45. This includes a three course lunch with coffee or tea and a welcome drink on arrival. Buy your tickets here.