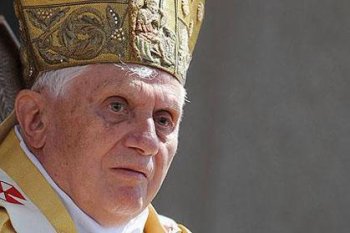 The Pope has given his personal support to a campaign being run by right-wing Catholics to have abortion "defunded" throughout the European Union.

The Pope said, "I salute the Movement for Life. I wish them success with the initiative called One of Us, so thatEuropeis always a place where the dignity of each human being is protected."

Launched last month by anti-abortion activists in 20 EU nations, the "One of Us" campaign is seeking to gather one million signatures from EU citizens by November 1, 2013 in order to force the European Parliament to schedule debate on the matter.

The proposal calls for a ban on the EU's "financing of activities which presuppose the destruction of human embryos, in particular in the areas of research, development aid and public health."

Speaking with Rome Reports, Gregor Puppinck the Director of the fundamentalist Catholic organisationEuropeanCenter for Law and Justice, explained, "In the U.S. there are a number of campaigns in order to de-fund Planned Parenthood. We are in some extent trying to do the same, we ask the EU to stop funding Planned Parenthood and similar organizations."