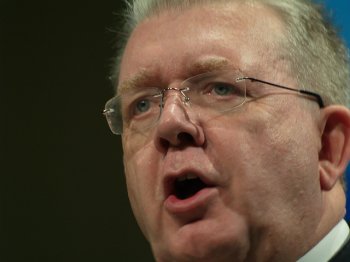 An NSS complaint to the Office of the Scottish Charity Regulator (OSCR) about St Margaret's led to it concluding that St Margaret's had broken both equality and charity law and gave it until April to change, or face deregistration as a charity.

Mr Russell has publicly expressed disappointment at the OSCR ruling, stating: "We do not believe that this outcome is in the best interests of the children St Margaret's helps, who are in need of a safe and loving family home."

Prior to the meeting, the NSS wrote to Mr Russell to express regret at his intervention, which appeared to support the charity rather than the independent statutory regulator, which the NSS believes to have acted entirely properly and in accordance with the law. The NSS would almost certainly have taken legal action had the OSCR not come to the conclusion that St Margaret's was breaking the law.

Speaking after the meeting, Keith Porteous Wood, executive director of the National Secular Society, said: "Mr Russell pointed to his Government's record on equality and emphasised his commitment to equality and "diversity". He told us that he thought St Margaret's do a good job, and he wanted them to be able to continue "with enthusiasm". He said Scotland would not be a better place if St Margaret's closed.

"He assured us that he wanted St Margaret's to follow the law, but he would not be drawn on whether that required them to be open to same-sex couples, despite the wealth of case law concluding it does. We pointed to Scottish Adoption, and the Christian-founded Barnardos and Coram Foundation adoption agencies all advocating opening their doors to same-sex couples as being in the best interests of children. But Mr Russell declined to express a view on this."

St Margaret's has claimed that it is following the law and has asked the OSCR to review their decision, and the outcome is awaited. Given the cogency of the OSCR report, and the sound legal foundation on which it is based, any change seems unlikely.

Mr Russell said that he would vigorously resist these allegations, and reaffirmed his Government's commitment to Catholic education in Scotland. However, he noted that infractions were dealt with by the UK government, who would have to pay any fines imposed.