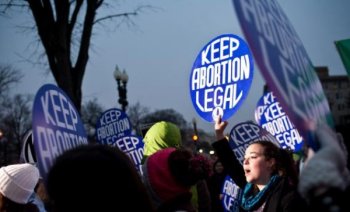 A new YouGov survey commissioned for the Westminster Faith Debates finds that 43% of people who identify with a religion are in favour of keeping or raising the current 24 week limit (compared with 46% of the general population), 30% would like to see it lowered (compared with 28%), and 9% support a ban (compared with 7%). The remainder of people say they 'don't know'.

Even though the Roman Catholic Church teaches that abortion is always wrong and should be illegal, only 14% of Catholics in this country are in favour of a ban.

A significant number of people believe that human life begins at conception, but this does not necessarily mean they are opposed to abortion.

44% of people believe that human life begins at conception, 30% at some time during pregnancy, 17% when the baby is born, and 8% don't know.

Amongst the religious people surveyed, Catholics, Muslims and Baptists are the most hostile to abortion, but only about half would like to see the law changed.

14% of Catholics surveyed support a ban and 33% would like to see the 24 week limit lowered.

30% of Muslims surveyed support a ban and 16% would like to see the 24 week limit lowered.

Those who rely on external religious sources for guidance, and whose religion offers an anti-abortion message, are the most likely to be hostile to abortion.

The survey finds that factors like gender, age and voting preference do not make much difference to attitudes to abortion. The people most likely to be hostile to abortion are those:

Only 8% of the population fits this profile, and of this 8% one third support a ban on abortion.

The survey finds that most people inGreat Britain— including religious people — rely most on their own judgment or feelings or the advice of family and friends for guidance.

Amongst the population as a whole, anti-abortion sentiment is declining and support for current abortion law is growing. Comparisons with earlier YouGov polls reveal that the percentage of the population who would like to see a ban on abortion has fallen from 12% in 2005 to 7% today. Of those who expressed a view, support for keeping (or even relaxing) the current 24 week limit has risen by about one-third to a clear majority (57%) today.

Professor Linda Woodhead of Lancaster University told the Guardian: "The impression one gets from many religious leaders and spokespeople is that most religious people are opposed to the liberalising trend in society. That is just not true and statistics like this give the lie to that view."