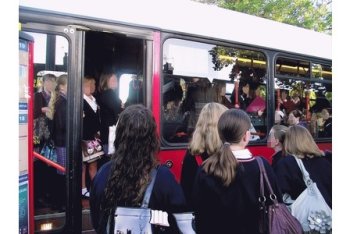 A council that is facing devastating cuts to services and employment is considering reinstating free transport to "faith schools" and grammar schools after scrapping it last year.

Kent County Council — which has just agreed a £94 million package of budget cuts — dropped free travel in September, except for families on maximum working tax credit and those receiving free school meals.

Now a cross-party committee is to look at the impact of the change. Trudy Dean, who is the leader of the Liberal Democrat group at the council, said the decision was a "big mistake".

She told the BBC: "We know that the grammar schools only take very few pupils from lower income families, about 3% in comparison with five times that number at non-grammar schools... this can only make that worse."

The decision to review the fees has been welcomed by some headteachers, including Brendan Wall, from St Simon Stock Catholic School, in Maidstone. He said: "People need to have transport to get to the school of their choice.

"I think it has affected some families – I've had one or two conversations with parents who said that they wouldn't be coming to our school because they can't afford the cost of transport for their child."

Mike Whiting, cabinet member for education at the council, said: "Perhaps we could move the threshold from maximum tax credit to bring more people into the frame," he said.

However, he said the council would still have to make large savings. He said: "The coalition has put massive pressure on local authorities to make cuts... this policy when it runs its course will save £2m per year."

The council is now cutting services for the elderly, young people's services and drastically reducing spending on the arts. A hundred more jobs are to be axed at the council on top of the 1,200 already dispensed with.