Victory for free speech as Government accepts reform of section 5 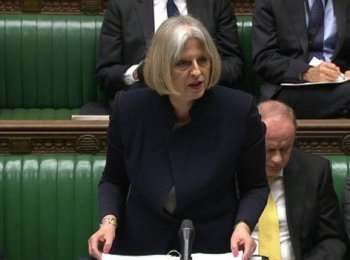 In a major victory for freedom of expression, Home Secretary Theresa May has bowed to the inevitable and agreed to accept a House of Lords amendment removing the word "insulting " from Section 5 of the Public Order Act 1986. Section 5 has a low prosecution threshold and there have been prosecutions for ridiculously trivial remarks made in public.

Speaking during the 2nd reading of the Crime and Courts Bill, the Home Secretary backed down and accepted, on the basis of information from the Director of Public Prosecutions, that the word insulting should be removed. The DPP had advised her that all recent prosecutions could also have been made using the "abusive" provision, which still remains as part of Section 5.

The Home Secretary's decision to accept the Lords' amendment may well have been influenced by the routing of the Government in the upper House when the matter was debated in December. Peers voted for the removal of "insulting", by 150 votes to 54, despite opposition from the Conservative and Labour frontbenches. It was the lowest pro-government vote in this Parliament. This followed intense lobbying by the Reform Section 5 campaign led by the Christian Institute and the National Secular Society. Major supporters included Rowan Atkinson and Peter Tatchell.

Keith Porteous Wood, Executive Director of the National Secular Society, who has been active in the campaign to make this change, said: "We congratulate the Home Secretary for removing a much-abused catch-all provision where the police could seemingly arrest and charge anyone that irritated them for using trivial or mocking words. The police did not even need to identify the victim that allegedly had been insulted, leaving the whole thing open to misuse. This is a welcome victory for freedom of expression.

"One such 'insult' was a student telling a policeman his horse was gay, and another student's banner claiming 'Scientology is a dangerous cult'. The change should also prevent street evangelists preaching against homosexuality being arrested and charged. We've said all along that free speech is not free unless it is for everyone – even those we don't agree with."

The campaign had the effect of bringing together under one umbrella the unlikely partnership of The National Secular Society and the Christian Institute. Keith Porteous Wood said: "As secularists we are not anti-religious and we will work with Christians or any other religious group when our aims are in accord."