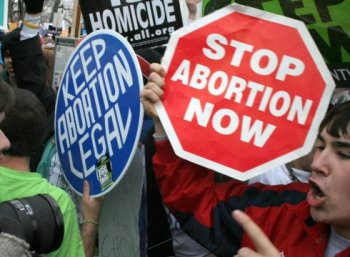 In 2012, 19 states in the USA enacted 43 provisions that "sought to restrict access to abortion services," according to the Guttmacher Institute.

"Although some of the most high-profile debates occurred around legislation requiring that women seeking an abortion be required to first undergo an ultrasound or imposing strict regulations on abortion providers, most of the new restrictions enacted in 2012 concerned limits on later abortion, coverage in health exchanges or medication abortion," the institute said in its 2012 state policy review.

The institute, named after a former president of Planned Parenthood, seeks "to advance sexual and reproductive health and rights."

Meanwhile, Catholic representation on Capitol Hill has reached an all-time high, with 163 members of the new 113th Congress identifying themselves as Catholic.

A new study by the Pew Forum found that the overall Catholic membership of both houses of Congress was up by 7 members, and the proportion of Catholics in the legislature had jumped from 29.2% to 30.6%.

Catholics form by far the largest single religious bloc in Congress. Although Protestants, taken as a single group, maintain their majority status with 56% of the membership, no single Protestant denomination is close to the size of the Catholic bloc.