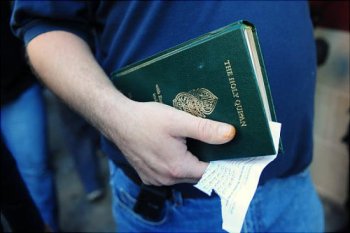 The trial has collapsed of a Leicester man who was accused of causing "religiously aggravated intentional harassment, alarm or distress by demonstrating hostility based on membership of a particular religious group". Peter James Crawford was said to have torn pages from his own copy of the Koran and thrown the book on the ground shouting "Your religion is a load of b***cks". He did this next to a stall run by the Islamic Information Centre, near the Clock Tower, in Leicester city centre, last May.

Kamran Qayyum, an employee of the IIC, told the court that Mr Crawford "started tearing up pages from a book and they were going on the floor. He wasn't saying anything. The pages covered a lot of ground, they were everywhere. I then noticed Arabic inscriptions and realised it was the Koran. I knelt down and was picking up the papers when he threw the Koran down, just missing me."

Mr Qayyum said: "The Koran is sacred to us and we honour it. We also have a Bible on our stand and we show the Bible the same respect. One of the laws of the Koran is it shouldn't be on the floor, it should be high up and our hands should be clean when it's touched. I was shocked."

Defence advocate Steven Newcombe said: "There are many who oppose Islam. Did you take it he was expressing anti-Islamic views and disrespecting the religion?"

"Yes," said Mr Quyyum, although he agreed that Mr Crawford did not threaten or provoke any violence.

Another stall volunteer, Zahid Hussein, said: "I saw him ripping up the book. I was in shock, disgusted. It's our life, our way of life and we live by that book – it's very sacred."

Mr Crawford claimed, in interview, that he was expressing his disagreement with religion of any kind. He told the police it was his own copy of the Koran he tore up, and he would have done the same with a Bible as he did not understand either holy book and "hated" all religion. "I'm not against the people, just their religion," he said.

James Bide-Thomas, prosecuting, said: "The real issue is whether Crawford was insulting and whether it was a crime that we say he committed. It's tradition in this country of freedom of speech and people are entitled to say what they want, as long as it's not illegal in relation to the law, which prevents people going out to cause harassment, alarm or distress by insulting behaviour, basically upsetting people.

"It's for you to decide whether what he did was insulting or whether it was a legitimate piece of freedom of speech being exercised or if what he did was deliberately calculated to upset the people from the Islamic Information Centre."

But the eight women and four men on the jury sent a note to the judge saying there was no prospect of them reaching either a unanimous or a majority verdict on which at least 10 of them agreed.

Crawford was released on bail with a condition imposed that he should not to go within half-a-mile of the Clock Tower on Saturday afternoons.

The Crown Prosecution Service has, in such cases, 14 days to decide whether or not to proceed with a retrial. The NSS Wrote to the CPS expressing some concern about the free speech implications of this case.

The CPS takes allegations of religiously aggravated offending extremely seriously, because of the impact these offences can have on our community. We therefore prosecute such cases robustly, according to the facts in the case. In this instance it was determined that there was a realistic prospect of a conviction, so we felt that it was important for a jury to be able to consider all the facts in the case.

There are a number of factors that I took into consideration in deciding whether a second trial should be sought. After looking at all the factors in this case I decided that the most appropriate course of action was not to seek a retrial on the same evidence, following the jury being unable to reach a verdict in the first trial.

Terry Sanderson, President of the National Secular Society, commented: "The Muslim volunteers put themselves out there in a public place with an idea that should not have special protection from argument or strong disapproval. We would protect the right of the Islamic Society to distribute their propaganda, but, providing it is done non-violently, we should also protect the right of those who dispute it to freely express their disproval."

See also: Charlie Hebdo and its right to lampoon Mohammed