Even fewer identify as Christian in latest opinion poll 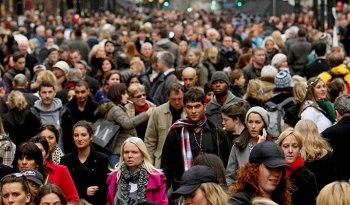 Hard on the heels of the release of the 2011 religious census results for England and Wales comes the publication (on 18 December 2012) of a very large opinion poll which collected information about another facet of religious identity. It was commissioned by Lord Ashcroft (international businessman, author, and philanthropist) as part of his regular series of polls on political issues. This one focused on the UK Independence Party. The survey was conducted online between 9 and 19 November 2012 among a sample of 20,066 Britons aged 18 and over.

The religion question asked was: 'To which of the following religious groups do you consider yourself to be a member of?'. This differed from the census question, which asked: 'what is your religion?'.

The most substantial demographic variations were by age and voting intention. The proportion of Christians was lowest (36%) among the 18-24s and rose steadily throughout the age cohorts to stand at 73% with the over-65s. For those saying they were members of no religious groups, the trend was in the opposite direction, starting high at 50% for the 18-24s and falling to reach 22% of the over-65s. Conservatives were 14% more likely to be Christians than Labour voters and 15% more than Liberal Democrats; and they were 11% less likely than the other two main parties to have no religion.

For more details, see table 88 of the data tables at: http://lordashcroftpolls.com/wp-content/uploads/2012/12/UKIP-poll-full-tables.pdf