EU Commissioner says blasphemy laws are undesirable in the EU, but it’s up to individual states to decide whether they implement them 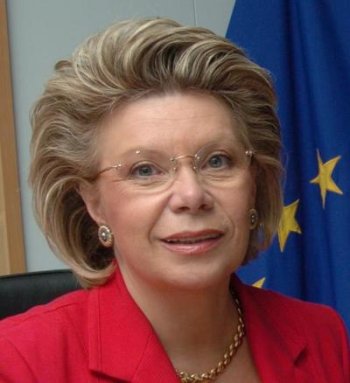 The EU Commissioner responsible for justice, fundamental rights and citizenship, Vivianne Reding, has said that blasphemy laws and other such restrictions are not acceptable and pose a threat to free speech.

She made her comments in answer to a parliamentary question from Dutch MEP Sophie in 't Veld (who is also an NSS honorary associate) and three others, Joanna Senyszyn, Cornelis de Jong and Marietje Schaake. They asked:

The recent wave of violence in the Muslim world following the online posting of a video depicting Mohammed has led numerous EU leaders to defend freedom of expression and opinion against accusations of blasphemy. At the same time, in the EU, some Member States still have and implement blasphemy laws, as demonstrated by the recent arrest of a 27-year-old man by the Greek authorities(1) and the prosecution of an artist by the Spanish authorities for a work he produced decades ago(2).

The Venice Commission, in its report of 23 October 2010, and the Parliamentary Assembly of the Council of Europe, in its Recommendation 1805 (2007) of 29 June 2007, pointed out that blasphemy laws are still in place in a minority of EU Member States (Austria, Denmark, Finland, Greece, Italy, Ireland and the Netherlands) and are rarely implemented, and that something similar to blasphemy — 'religious insult' — is still an offence in a large number of Member States (Cyprus, the Czech Republic, Denmark, Spain, Finland, Germany, Greece, Italy, Lithuania, the Netherlands, Poland, Portugal and Slovakia). Both the Venice Commission and the Parliamentary Assembly recommended abolishing the offences of blasphemy and of insult to religious feelings, in view of Articles 10 (freedom of expression) and 9 (freedom of thought, conscience and religion) of the ECHR(3), which are also mirrored in Articles 11 and 10 of the EU Charter of Fundamental Rights. Article 20(2) of the ICCPR stipulates that 'any advocacy of national, racial or religious hatred that constitutes incitement to discrimination, hostility or violence shall be prohibited by law'.

1. Does the Commission consider that laws against blasphemy and religious insult are contrary to freedom of expression?

2. Does the Commission consider that the arrest and conviction of EU citizens on charges of blasphemy is compatible with the EU Treaties and the Charter of Fundamental Rights?

3. Does the Commission call for the abolition of blasphemy laws in its external policies?

4. Will the Commission advocate a worldwide ban on blasphemy laws within international organisations such as the UN?

5. How will the Commission ensure that freedom of expression cannot be restricted by laws against blasphemy and religious insult both within and outside the EU?

Ms Reding, answering on behalf of the European Commission, said:

Freedom of expression constitutes one of the essential foundations of our democratic societies, enshrined in the Charter of Fundamental Rights of the European Union and the European Convention on Human Rights. However, according to Article 51 (1) of the Charter of Fundamental Rights, its provisions are addressed to the Member States only when they are implementing Union law. When enacting or maintaining national blasphemy laws the Member States concerned do not act in the course of implementation of EU law. In that matter it is thus for these Member States alone to ensure that their obligations regarding fundamental rights – as resulting from international agreements and from their internal legislation – are respected.

As regards the EU's external policy, the Council expressed in its November 2009 conclusions its deep concern that in countries that have legislation on defamation of religions, such legislation has often been used to mistreat religious minorities and to limit freedom of expression and freedom of religion or belief. The Council furthermore underlined that no restrictions in the name of religion may be placed on those rights and that religion may never be used to justify or condone the restriction or violation of individual rights.

Terry Sanderson, president of the National Secular Society, said: "This seems like a very complacent answer. On the one hand Ms Reding says that the EU can't stop states within the union bringing in and enforcing blasphemy laws, but they are highly undesirable outside the EU. Why does she think the effects on free speech are different in Europe than anywhere else? These laws are misused just as much in European states as they are in Muslim ones."