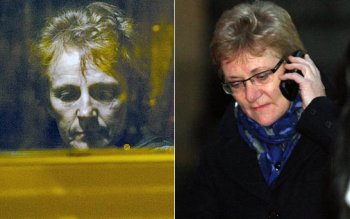 Two Scottish Catholic midwives who didn't want to supervise staff who carried out abortion procedures have appealed to the Court of Sessions after their arguments were rejected in a judicial review last year.

Mary Doogan and Concepta Wood (right) said being forced to supervise Glasgow health board staff taking part in abortions violated their human rights. But Judge Lady Smith ruled against them, saying they were protected from direct involvement in abortion procedures by the 1967 Abortion Act.

The women argued that by delegating, supporting and supervising staff involved in the procedures they were being forced to enable the procedure.

Both women were midwifery sisters at the Southern General Hospital inGlasgow. Their counsel Gerry Moynihan QC told the court that the case may go to the Supreme Court from either side.

Mr Moynihan told Lord Mackay, sitting with Lady Dorrian and Lord McEwan, that in so far as the women were part of a team their right to conscientious objection extended to the whole of their duties, save for the provision that there was an obligation to participate in life-saving measures.

He said neither woman claimed any conscientious objection to the involvement in treatment that was necessary to save the life of the mother.

"In the 1967 Act what Parliament set out to do was to balance two objectives, conscious that abortion was a controversial matter," he said.

"What they sought to balance was the interests of those who wished abortion to be liberalised and carried out more safely, so it was not done by back street practitioners, and regulated. It decriminalised abortion in certain circumstances."

Mr Moynihan said parliament also recognised in the debate that having decriminalised it, it could then be that a superior could direct a junior person to participate in treatment to which they had a well-recognised conscientious objection.

"So what Parliament did was balance the interests of those who wished to liberalise the treatment while respecting the right of conscientious objection," he said. Much of the argument hinged on how narrow the meaning of the word "participation" should be.

Mr Moynihan said there was clear legal authority that the right to conscientious objection was intended to apply to the whole team whose involvement was necessary to achieve the procedure. He said that because the midwives let the administration know of their objection in advance the health board could manage its staff as a whole to respect their right to conscientious objection.

"The administrative convenience of the health board is irrelevant because the right is a balance between facilitating abortion while respecting the genuine conscientious objection of medical, nursing and ancillary staff," he said.

He told the court that the woman said that prior to 2007 there were "work around arrangements".

Mr Moynihan argued that "the dividing line" over what was exempt ought to be an individual's conscience and not a bureaucrat saying that was not in the literal meaning of participation.

Brian Napier QC, for the health authority, argued that having responsibility of a managerial, supervisory or support nature did not of itself trigger the right to conscientious objection.