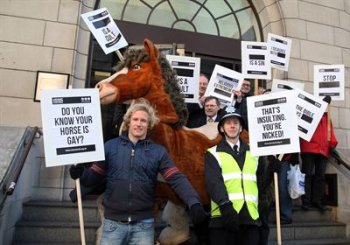 The Reform Section 5 campaign chalked up a spectacular victory for freedom of expression on Wednesday evening when the House of Lords passed an amendment to remove the word "insulting" from section 5 of the Public Order Act. The win was by a comfortable margin, 150 votes to 54.

The victory was almost unprecedented, because it was achieved in the face of outright opposition from both Conservative and Labour frontbenches, who whipped against the amendment (requiring their members to vote against).

Number 10 admitted that it had not anticipated the defeat, which was a humiliation for the two main parties. To their credit, the Lib Dems, for whom this change is party policy, gave their complete support.

The amendment was tabled by independent peer Lord Dear, himself a former chief police officer. He told peers that "The amendment would herald a very significant victory for freedom of expression". He listed a sample of the many distinguished individuals and organisations that had supported the amendment, including the current and previous Directors of Public Prosecutions, a former Lord Chancellor, the Joint Parliamentary Committee on Human Rights, Liberty, Justice, the Peter Tatchell Human Rights Foundation, the Christian Institute and the National Secular Society.

Peers queued up to speak in support of Lord Dear. Not a discordant note was struck until the opposition frontbench peer, Baroness Smith of Basildon, announced that: "We do not want to risk removing a useful tool which currently enables the police to address homophobic and religiously offensive issues." She sought to justify this by giving an example of homophobic bullying which she claimed needed the retention of the word "insulting". Humiliatingly for a frontbench spokesperson, no one else agreed: they were adamant that there were plenty of other parts of the Public Order Act that could be used to prosecute this antisocial behaviour.

The Government spokesperson winding up did little better and was equally unpersuasive. He maintained that the amendment would remove the police's "flexibility ...to respond to hate crime and to defuse tension quickly in public order situations".

Lord Dear insisted on taking it to a vote, pointing out how many peers had come from all corners of the country to take part in this debate: "We have waited far too long for this."

This victory, remarkable as it is to have been achieved in the face of such opposition, is not the end of the fight, however. The Bill revised by this amendment will need to be approved by the House of Commons, where there is also an energetic, supportive campaign led by Rt Hon David Davis MP. So it is to the Commons that we now need to turn our focus.

Earlier there had been wry smiles all round when Lord Dear observed that "The National Secular Society and the Christian Institute are often at odds, but here they stand shoulder to shoulder supporting the amendment." Last night was the culmination of an intense and vigorous campaign by both organisations and Peter Tatchell, who yesterday appeared on the BBC Daily Politics programme taking part in an amusing stunt involving a pantomime horse outside the Home Office. This was preceded by a persuasive appeal by comedian Rowan Atkinson.

The Christian Institute and the NSS, who both accept that they couldn't have achieved this victory without a joint campaign, have lobbied relentlessly and twice written joint letters to peers. Simon Calvert, Campaign Director of RS5, said he was "delighted" at the result and commented: "Freedom of speech is such a vital part of British heritage but this law has seen many people suffer – simply for speaking their mind. Tonight we have seen that the House of Lords does not want this to continue. Now it's up to the Government to decide whether it's going to allow tonight's vote to stand. We hope they'll see sense and allow this important reform to become law."

Below: The BBC's Daily Politics discusses reform of Section 5.