RC Bishop of Motherwell’s intemperate rant at the Prime Minister 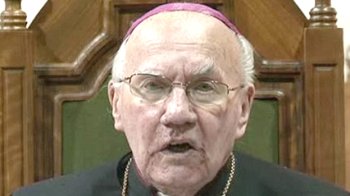 The National Secular Society has criticised the intemperate rant at the Prime Minister, widely reported in the media, by the RC Bishop of Motherwell, Joseph Devine.

Alistair McBay, NSS spokesman in Scotland said: "Joseph Devine's latest outburst follows a series of vituperative and inhumane pronouncements by the Scottish Catholic hierarchy on same sex marriage, for example by likening it to bestiality and incest. Each pronouncement has further alienated the Church from its own congregations and has horrified the wider population. Joseph Devine remains blissfully unaware that his lecture to the PM is so spectacularly arrogant and at variance with public opinion that it makes him a laughing stock ­– albeit not for the first time.

"The Church has gambled its entire moral authority on gay marriage, and spectacularly lost. Despite the Catholic Church raising the stakes on this issue to the maximum, politicians on both sides of the Border are totally ignoring it.

"Bishop Devine's assertion that he 'will take no finger-prodding lectures from anyone or any group devoid of moral competence' needs to be seen in the context of polls showing that the line taken by Catholic bishops on moral issues is widely ignored, not just by the public but by the vast majority of Catholics in the pews in this country: see below.

"We call on those political leaders who were so quick to condemn Stonewall for awarding its 'Bigot of the Year' award to Cardinal O'Brien to be as swift, as public and as damning to criticise Bishop Devine for his much less temperate outburst directed at the Prime Minister."

On the eve of the first Papal UK visit for almost 30 years a new survey reveals that the majority of British Catholics disagree with their Church's stance on key controversial issues such as contraception, abortion, homosexuality and priest celibacy.

This week's ITV's Tonight programme has commissioned the poll, conducted by YouGov, to gauge attitudes among British Catholics to their Church's doctrine and the Pope. The survey of 1,636 Catholics shows that there is still firm support for Pope Benedict XVI even though an overwhelming majority believe the recent child abuse scandals have permanently damaged the Catholic Church's reputation.

Asked about their views on contraception, just 4% agreed with the Catholic Church that artificial contraception is wrong and shouldn't be used. The vast majority of those asked (71%) believed that contraception should be used more often to avoid STDs and unwanted pregnancies. A further 23% said that it was entirely up to couples on whether to use contraception.

Only 11% of respondents supported the Catholic Church doctrine that homosexual acts are morally wrong. 41% stated that both gay and straight relationships should be celebrated, and 28% said that it was up to adults to do what they want in private. On the issue of married priests, 65% said that Catholic priests should be allowed to marry, with just 27% believing that they should remain celibate.

Despite this, when asked whether the Pope should continue in his position, 72% said he should remain Pope compared to just 14% saying he should stand down. Questioned about the funding of the Papal visit, 47% said that it was appropriate for the Government to contribute to the cost of the visit, with 44% saying they felt it was inappropriate.