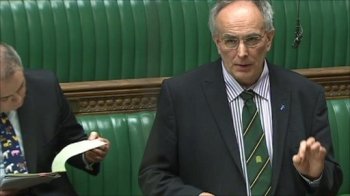 MPs have backed a bid by Conservative MP Peter Bone (right) to amend the Charities Act to restore the presumption that all religious groups are for the public benefit and therefore can be charities.

Mr Bone's Ten Minute Rule bill is aimed at protecting religious groups like the Preston Down Trust, a member of the Plymouth Brethren, who recently had its charitable status removed by the Charity Commission after it decided that the exclusivity with which the Church conducts many of its activities, did not provide sufficient benefits to the wider public.

Writing on the Conservative Home website, Peter Bone, an active member of the Church of England, said: "This is another sign of a growing secular movement against religious groups in this country and another example of the state interfering with the church. "

Introducing his bill to Parliament, he said: "What is happening is creeping secularism in society. With just a few days before we celebrate the birth of Jesus Christ, and in recognition of religious freedom, I urge right hon. and hon. Members to support my ten-minute rule Bill."

166 MPs voted in favour of Mr Bone's attempt to introduce the bill, with just 7 voting against.

Bills introduced under the ten-minute rule are generally used only as a means of making a political point as there is little parliamentary time available to pass the bill into law.

The move comes after a letter signed by 113 MPs in support of the Plymouth Brethren was was delivered to the Prime Minister on Monday. An additional letter demanding that ministers take action, signed by 53 MPs, including 45 Conservatives, was published in the Telegraph on Wednesday.

The decision not to grant charitable status to the Plymouth Brethren led to Christian MPs to accuse the Charity Commission of having "secularising agenda". Conservative MP Charlie Elphicke accused the Charity Commission of trying to suppress religion and predicted that the Plymouth Brethren case, where the organisation has been refused charity status, will be the first of many.

The Charity Commission chair, William Shawcross, has described such accusations as "quite simply, wrong."

After a series of recent parliamentary debates on the issue, a report detailing reasons why the Plymouth Brethren do not meet public benefit requirements was published by Paul Flynn, the Labour MP for Newport West.

The report, written by John Weightman, a former member of the Brethren, has also been submitted to the Charity Commission and the Public Administration Select Committee, of which Flynn is a member.

Elizabeth Chamberlain, policy officer at NCVO, said: "Public benefit is what makes a charity a charity, and most are keen to demonstrate the value of their work.

"Peter Bone's plan risks downgrading religious charities in the public mind. They would become unique among charities in not having to show how they are of benefit to the public."

In a recent Lords debate about the role of religion in public life, Baroness Berridge, who has family members in the Exclusive Brethren, questioned whether religious groups that 'harm health and split families' should be allowed to be charities. The Conservative peer called for a former Archbishop to set up a church-led inquiry into the theological and psychological implications of Exclusive Brethren beliefs.