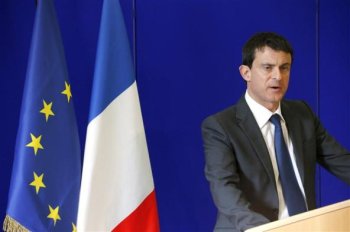 The French Government appears to be lining up for a full-scale confrontation with the Catholic Church, which is increasingly trying to interfere in political processes.

The socialist administration has announced it intends to establish a new agency to ensure the nation's secularism is protected from religious extremism.

The agency will monitor extremist groups — not just Islamists, but of all faiths — and if they show signs of what the Interior Minister, Manuel Valls (right), called "religious pathology" legal action to dissolve the organisation will be taken – and foreign imams preaching hatred and violence will be deported.

Speaking at a conference on secularism, Mr Valls pointed to the incident last year when a French Islamist had gone on a killing spree, shooting to death three soldiers and four Jewish people. He said this illustrated how quickly religiously radicalised people could turn to violence. Mr Valls and two other government ministers said that the new agency would protect and promote the tradition of "laïcité", which is the French version of secularism. The previous government of Nicolas Sarkozy had undermined this principle by pandering to the Catholic Church.

"The aim is not to combat opinions by force, but to detect and understand when an opinion turns into a potentially violent and criminal excess," Mr Valls said. "The objective is to identify when it's suitable to intervene to treat what has become a religious pathology."

Mr Valls made clear that this was not an anti-Muslim exercise, but would cover all religious extremists. He mentioned the ultra-traditionalist Catholic group Civitas, which has aligned itself with the fascist Front National Party. He said the police were already monitoring Civitas as many of its activities already skirt the law.

Valls said the government had a duty to combat religious extremism because it was "an offence to the republic" based on a negation of reason that puts dogma ahead of the law. He cited extreme religious groups in other counties, Salafists, ultra-Orthodox Jews and others who sought to separate themselves from the modern world.

Announcing his initiative on Sunday, the President, Francois Hollande, said the new agency would also study ways to introduce classes on secular morality in state schools.

Education Minister Vincent Peillon told the conference the classes would stress the French values of equality and fraternity that teachers say pupils — especially in poorer areas with immigrant populations — increasingly do not respect. "We have to teach this and it's not being done," he said. "If we don't teach it, they won't learn it."

Valls urged the more militant secularists at the conference not to see religions as sects to be opposed and to understand that established religions could help fight against extremists. "We have to say that religions are not sects, otherwise sects are religions," he said.

Meanwhile the confrontation between the Catholic Church and the Government over plans to legalise gay marriage is ramping up. The Church has called several large-scale demonstrations throughout the country in opposition to the plans, while last weekend up to 150,000 people marched through the streets of Paris in support of the proposals.

Now, Housing Minister Cecile Duflot has warned that she might soon requisition unused church buildings in Paris for the homeless this winter. She told the Bishop of Paris that she "would not understand if the church does not share our goal of solidarity".

Ms Duflot, a Green Party member, denied any connection between her threat and the debate over gay marriage, which her party vigorously supports. But Christine Boutin, a Catholic ex-MP accused the Government of "Cathophobia".

See also: Tens of thousands take the streets of Paris in support of gay marriage