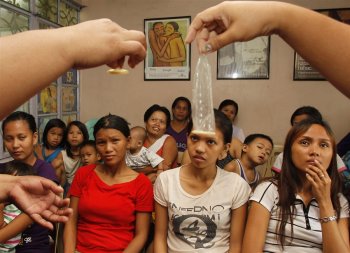 The Philippine parliament approved legislation on Monday that permits government funding for contraception and for sex education classes in schools.

The legislation was passed despite ferocious opposition from the Catholic Church, which exerts a domineering power bloc in the country.

The legislation has been on the cards for over a decade, but progress has been thwarted so far by the Church. Now the Senate and the House of Representatives passed different versions of the bill which will have to be reconciled before President Benigno Aquino III has an opportunity to sign it.

Sen. Miriam Defensor-Santiago, one of the leading advocates of the bill said: "The Catholic church has steadfastly opposed the (reproductive health) bill for 13 years. But I humbly submit this afternoon that there is no force more powerful than an idea whose time has come."

Aquino, who certified the bill as urgent, considers it a major step toward reducing maternal deaths and promoting family planning in the impoverished country, which has one ofAsia's fastest-growing populations. In its usual hyperbolic style, the Church predicted all kinds of moral catastrophe if the bill was passed.

Archbishop Socrates Villegas, vice president of thePhilippines' Bishops Conference, said that "the wide and free accessibility of contraceptives will result in the destruction of family life. Money for contraceptives can be better used for education and authentic health care," he said, adding that "those who corrupt the minds of children will invoke divine wrath on themselves."

The Catholic bishops have a long history in interfering in and controlling the politics of the Philippines. They mobilised popular support for the 1986 "people power" revolt that toppled dictator Ferdinand Marcos and the 2001 overthrow of another president, Joseph Estrada.

An independent survey in June last year found that 68% of respondents agreed that the government should fund all means of family planning. An October survey of 600 teenagers in Manila, the capital, also carried out by Social Weather Stations, an independent opinion-polling institute, found that 87% believed the government should provide reproductive health services to the poor.

The United Nations said early this year that the bill would help reduce an alarming number of pregnancy-related deaths, prevent life-threatening abortions and slow the spread of AIDS.

The U.N. Population Fund says 3.4 million pregnancies occur in the Philippines every year. Half are unintended and a third are aborted, often in clandestine, unsafe and unsanitary procedures. The fund says 11 women in the country die of pregnancy-related causes every day. Nearly 70 percent of women use no contraception at all.

Reproductive health programmes are patchy and often unavailable to the poor. Some local governments have passed ordinances banning the sale of condoms and their distribution in health clinics.

"Many Filipino women have faced difficulties and sometimes death because of the absence of a comprehensive and consistent reproductive health policy. This law can change that," said Carlos Conde,Asiaresearcher at New York-based Human Rights Watch.

Former Manila Mayor Lito Atienza, who opposes the bill, said pro-church groups were considering asking the Supreme Court to declare the bill unconstitutional. "You cannot legislate anything that is contrary to one's faith," he told reporters.