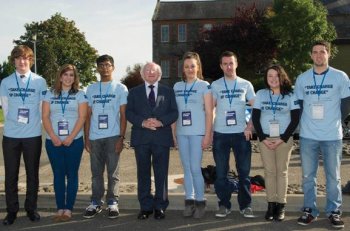 A consultation among young people in Ireland initiated by the President, Michael D. Higgins (right), shows strong support for making the country a secular state.

The 17–24 year olds who were consulted issued a "Take Charge of Change" declaration in which they asked for major reforms of the education system to include a focus on learning Irish, more investment in special education, and extra classes in IT and new technologies.

Equal marriage and adoption rights for gay and transgender couples and the creation of a secular state are also among the rights being demanded. But the declaration says that political reform is needed to bring about the necessary changes.

"Our vision for Ireland is a secular, inclusive, multilingual, confident State with excellent and universally accessible education, health and social support systems; an Ireland of which we can be proud on the global stage," it says. "We have to engage in a process of systematic political reform.

"Our vision includes economic prosperity, an enterprise culture and the opportunity for education and employment for all, a place where young people reach their potential, have a solid future and a valued voice, free from forced emigration and the burden of national debt."

The report comes after Mr Higgins invited young people last May to take part in a national discussion on how Ireland should develop. Regional workshops were held in Dublin, Cork, Monaghan and Galway last September. It resulted in a report called 'Being Young and Irish' (pdf), which was launched by the president over the weekend.