We must defend freedom of speech, says United Nations expert 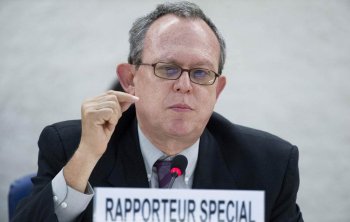 In a statement issued by the United Nations, its special rapporteur on freedom of expression, Frank La Rue, said that it is essential to create an environment conducive to critical discussions of religious and racial issues and to promote understanding and tolerance by deconstructing negative stereotypes.

In his report[1] to the United Nations General Assembly Mr La Rue highlighted the phenomenon of hate speech and discussed State responses to this challenge.

"The struggle against intolerance is both an urgent and permanent task. Regrettably, incitement to hatred continues to be found in all regions of the world. The question is when and how States can legitimately limit freedom of expression."

The Special Rapporteur noted that the right to freedom of expression should only be restricted in extreme cases, such as incitement to genocide and incitement to hatred, stating that "any restriction to freedom of expression must be provided by a law that is clear and accessible to everyone. It must also be proven as necessary and legitimate to protect the rights or reputation of others, national security or public order, public health or morals; and it must be proven as the least restrictive and proportionate means to achieve the purported aim."

Mr La Rue described the efforts of many governments to combat hate speech as misguided, and referred to the adoption of ambiguous legislation with disproportionate sanctions that are frequently used to silence criticism and political expression.

"Anti-blasphemy laws, for example, which are inherently vague and leave the entire concept open to abuse, are often used as a means of quashing the right to freedom of expression," Mr La Rue said, calling upon States to repeal anti-blasphemy laws and to initiate legislative and other reforms that protect the rights of individuals in accordance with international human rights standards.

"Laws to combat hate speech must be carefully construed and applied by the judiciary so as to avoid excessively curtailing legitimate types of expression. At the same time, while laws are certainly necessary and an important component in addressing hate speech, they should be complemented by a broadest of policy measures to bring about genuine changes in mindsets, perception and discourse," Mr La Rue added.

[1] United Nations General Assembly: Note by the Secretary-General transmitting the interim report of the Special Rapporteur on promotion and protection of the right to freedom of opinion and expression; A/67/357 (pdf) (link is unreliable; see here and click on the link "A/67/357" near the bottom)

See also: Russia plans new law that will crack down hard on critics of religion