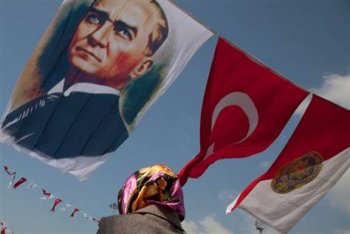 Turkey's ruling Justice and Development Party (AKP) has continued its attempt at step-by-step Islamisation of the country by removing "Atatürk's reforms and principles" and "secularism" from the wording of the parliamentary oath in its submission to the Constitutional Conciliation Commission, daily newspaper Hürriyet has reported.

Deputies currently swear in to "remain true to the secular and democratic republic and to Atatürk's reforms and principles," however the AKP's submission excludes those lines.

Meanwhile, the pro-Kurdish Peace and Democracy Party's (BDP) submission suggests that deputies do not recite the oaths all together, while the Republican People's Party's (CHP) proposal included "loyalty to the constitution," as well as human rights.