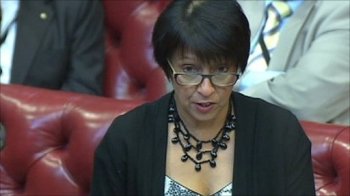 The Liberal Democrat peer Baroness Falkner has given a spirited defence of secularism during an otherwise largely deferential debate about the role of religion in public life.

Her intervention came during a debate moved by Lord Singh of Wimbledon to ask the Government what assessment they had made of the role of religion in society in the UK.

Lady Falkner emphasised the role and importance of the secular space in public life and said religions have just as much right to express their views as anyone else, but those views should not be privileged in the framing of public policy and law. She said Secularism, often unjustly maligned, is becoming more widely understood and recognised as its importance in a multi-religious society becomes more appreciated. She told the House of Lords that separating religion and state enables those of all religions and none to participate as equal citizens.

She continued: "In a society in which church attendance continues to dwindle and congregations age - I am sure there are anecdotal exceptions, but the statistics are very clear - we rapidly approach a time when we need to think about the extent to which religious precepts should be allowed, often through the workings of both Houses, to override the view of the people on sensitive social issues. When I say "the view of the people", I mean even religious people."

In a later intervention, Baroness Flather said she was "pleased that the noble Baroness, Lady Falkner, put in a word or two that did not quite pass for praise of religion." She declared herself as a secularist and atheist but distanced herself from Richard Dawkins, saying "not all atheists are like him."

Lord Singh, opening the debate, bemoaned the "bad press" received by religion and complained about faith being "pushed into the margins of society". He said keeping religion out of public life was akin to keeping ethical considerations out of politics.

Despite numerous claims of religion being marginalised, The Lord Bishop of Bath and Wells made full use of his privileged position in the House of Lords to sing its praises. He did, however, describe the recent Synod vote not to allow female bishops as a "public relations disaster and a serious setback".

Crossbench peer Lord Bilimoria expressed his sadness that religion is declining in the UK and asked if the Government was doing enough to encourage and promote religion. He added "What religions do more than anything else is promote integrity and values."

During a thoughtful intervention, another crossbench peer, Lord Hameed said: "Religion binds people together in communities, and politics helps to mediate peacefully between their differences. One of the greatest tragedies of the 20th century came when politics was turned into a religion. The single greatest risk to the 21st century is that the opposite may occur, not when politics is religionised, but when religion is politicised."

Conservative Peer and former Secretary of State for Education, Lord Patten, told peers it was important to recognise that Governments can benefit from the spiritual guidance and advice of religious groups, but warned "religion should not be a matter for Parliament, despite the presence of the "reverend Prelates and most reverend Primates in your Lordships' House."

The crossbench peer Lord Curry of Kirkharle then expressed deep concern about "the increasing dominance of secularism". He suggested that as a consequence, many Christians found themselves not only marginalised but in some cases victimised. He said he was sure that this applies to other faiths, too. He added, "Doing God and doing good is what millions of people in Britain want the freedom to do today."

Conservative peer Baroness Berridge used her speech to commend the Charity Commission's recent decision to refuse charitable status to the Exclusive Brethren and dismissed concerns that the charitable status of other religions was at risk.

She explained that she has family in the Brethren herself, so knows how they work: "They hold to the doctrine of separation, so exclusives cannot live in semi-detached houses, as they share a party wall with non-Brethren.

"They cannot eat with non-Brethren, cannot have friends with non-Brethren; they have no TV, radio, cafes, restaurants, etc. They can attend only Brethren schools and they now work only for Brethren businesses. Attending university is banned."

"Groups about whom there is credible evidence that they harm health, split families and send no one to university can exist in a liberal society, but whether they should be charities is very much open to doubt," she added.

"The religion and public benefit guidance needs to be clarified, but we also need clarity on the outer limits of what is acceptable behaviour for all religious groups."

1,175 religious organisations successfully applied to the Commission for charity status in the past year. Just one – the Brethren ­– was turned down for public benefit reasons.

Winding up the debate, the Minister for Faith and Communities, Baroness Warsi, again stressed the "vital role" religion plays in British society. To underline the importance attached to religion by the Government she then went on to point out the vast amounts of money they are spending on various interfaith projects.

Lady Warsi said the Government was committed to maintaining the status of religious education as a compulsory subject that all pupils must study, and to the provision of collective worship in schools. She also repeated Communities Secretary Eric Pickles' assertion, and with equally careful wording but also with no basis, that council prayers at the start of Council meetings are now legal.

"When I first set the tone for this Government's faith agenda in 2010, declaring that we would "do God", many warned that this was something that a government Minister should not say. Two years on, I am heartened to see that so many Ministers have got behind this agenda, and our actions demonstrate the importance that we attach to the role of religion in British society."