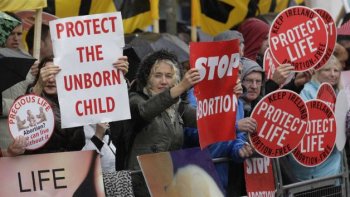 The Secular Medical Forum has condemned the state of abortion laws in Ireland after a 31-year old woman died of septicaemia following a protracted miscarriage in Galway, Ireland.

It was reported this week that Savita Halappanavar repeatedly asked for her non-viable pregnancy to be medically terminated but this request was refused and she was told that Ireland is "a Catholic country". Mrs Halappanavar subsequently developed septicaemia and died.

In a statement issued on Wednesday, The Secular Medical Forum said it believed that "this death could have been prevented if Ireland's law on abortion focused upon the need of vulnerable patients, rather than upon Catholic doctrine. The SMF believes that healthcare should be provided free from the intrusion of religion. Bioethics is hindered, not helped, by relying upon religious sentiments.

"The SMF is aware that women around the world suffer due to the imposition of religious beliefs which takes away their autonomy over their own bodies. If this case had occurred in the United Kingdom, it would have been legal for Mrs Halappanavar to have a safe abortion. However in the UK there is the continual threat to abortion rights by religious groups who wish to inflict their particular beliefs upon other people. The SMF defends the right of religious people to hold their beliefs; however, patients must remain free from unwelcome religious interference.

"The SMF is saddened that Mrs Halappanavar had to die in order for this issue to make the front page of this morning's Irish Times. The SMF hopes that Ireland's abortion laws are reformed so that this tragedy is not repeated."