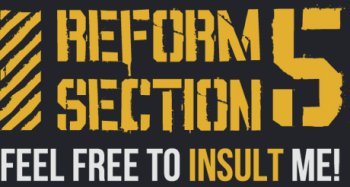 The Reform Section 5 campaign has taken a major step forward with the tabling of an amendment in Parliament to remove the word "insulting" from section 5 of the Public Order Act.

The amendment has been welcomed by the incoming Chair of the Equality and Human Rights Commission, Baroness Onora O'Neill, who said: "There is evidence that police are using this power to arrest and fine people for exercising their fundamental human right to freedom of expression.

"Limitations on free speech to deal with offences such as incitement to hatred and violence are clearly necessary. However, a blanket ban on the use of any insulting words or actions is dangerous because it could criminalise anyone who speaks their mind, regardless of their intention.'

"A legal change is vital to protect free speech along with better guidance on equality and human rights, to help police find the right balance between legitimate free speech and taking justifiable action against abusive words or conduct.'

The influential Joint (Parliamentary) Committee on Human Rights has also recommended that:

"We understand the sensitivities with certain communities on the issue of criminalising insulting words or behaviour, but nonetheless we support an amendment to the Bill which reduces the scope of Section 5 Public Order Act 1986 on the basis that criminalising insulting words or behaviour constitutes a disproportionate interference with freedom of expression."

The campaign to reform section 5 has been led by the Christian Institute and the National Secular Society who last week wrote to every peer asking them to support the change.

"Given the high level of support, especially with such prestigious names, we are highly optimistic that this campaign will be successful. The deadline for the Government to respond to the consultation passed many months ago and there is no credible opposition".