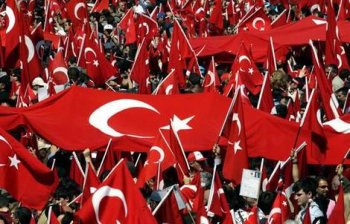 An overwhelming majority of Turkish people want secularism to be included in the country's new charter, a recent survey conducted by KONDA for the Turkish Economic and Social Studies Foundation (TESEV) has revealed.

The survey was conducted through face-to-face interviews with 2,699 people of various ages and social groups across 29 provinces on Sept. 22 and 23.

The new constitution should also be in line with the principles of Mustafa Kemal Atatürk, the founder of the modern Turkish Republic, a majority of those surveyed said. Some 82 percent agreed that the charter must include "Atatürk's principles and revolutions and Atatürk nationalism" as it currently does.

The participants also said the Religious Affairs Directorate should remain as a constitutional institution to regulate religion, however, 84.1 percent believe that the directorate, which has been under constant criticism for catering to the needs of Sunni Muslims, should be of service to all religions and sects.

Consistent with previously conducted surveys, the top issues that Turkish people want the new constitution to emphasize are "justice" and "equality."