No religious harassment at The Times, rules tribunal 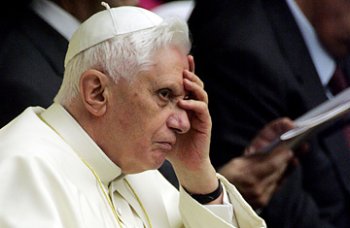 A sub-editor on The Times who was offended by a colleague shouting out an apparently derogatory comment about the Pope has lost his claim of religious harassment in the workplace.

An Employment Tribunal ruled that there was no intention to cause offence and it was not reasonable for the comment to have had the effect of creating a hostile environment.

Mr Heafield worked for The Times as a casual sub-editor. The paper was running a series of articles about allegations of child abuse, and cover-ups, in the Catholic Church. Mr Heafield – a practising Catholic – felt that the newspaper was portraying anti-Catholic feeling by running these articles.

Before being given a specific headline, all news stories would be allocated a one word working title so that a mock-up of the newspaper could be made which set out where each article would be positioned. One of the stories which The Times was working on concerned an allegation that the Pope had, in a previous role, protected a paedophile priest. This story was allocated the title 'The Pope' for the purposes of the mock-up.

As the deadline approached for the newspaper to be printed, one of Mr Heafield's colleagues realised that he had not seen the story. He shouted across the room 'Can anybody tell me what's happening to the f*** pope?' He received no response so repeated the question and raised his voice.

A couple of days later, Mr Heafield sent an email complaining that he has found the remark offensive.

Mr Heafield then brought a claim for harassment and victimisation, alleging that the comment had intended to insult his religion, even though no-one in the office knew he was Catholic.

Alternatively, even if that was not intended, the comment was very clearly anti-Catholic and therefore it was reasonable for him, as a practising Catholic, to have been insulted.

But the Tribunal found that the comment had not been intended to cause offence. The comment was not personal, and the subject of the comment was the news story, not the Pope himself; it was not reasonable for the comment to have had the effect of creating a hostile, intimidating, degrading, humiliating or offensive environment for Mr Heafield, as defined in the Employment Discrimination legislation.

The Tribunal said the comment was just a 'trivial and transitory' comment. Nor was there any evidence to suggest that the comment had been made on religious grounds; there was no evidence that the individual who made the comment was using it as a precursor to create a hostile environment.