If you can’t prove you’re a Christian, get off the school bus 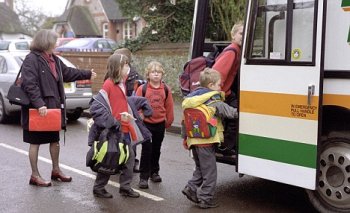 Flintshire County Council is proposing to restrict subsidised school transport to religious schools to those pupils who can prove that they are of the religion that the school espouses. Before they can get on the school bus, pupils will have to provide evidence that they are true Catholics/Anglicans/Sikhs etc. etc. such as with a baptismal certificate.

No baptism, no free bus.

Cllr Chris Bithell, cabinet member for education, has described the proposals as "fair". He told the local Leader newspaper: "In this current financial climate we have to look at means to make savings. If parents choose a school other than their local school then they have to pay and that's the principle we will be using in this case.

"We will provide free school transport for children of a particular faith, if they can demonstrate they are of that faith. But in other cases, where parents are using that school for reasons other than faith, then they will have to pay transport fees.

"There has been a bit of a loophole in the past. This is certainly fair because we are applying the same principle in all cases."

Simon Hughes, headteacher at St David's, has questioned how pupils will prove their faith. "As a Catholic school we are not just here to provide education for Catholics; we open our doors to all faiths," he said. "It's a dangerous step to go down in terms of proving your faith – how do you prove your faith? Not everyone has a baptism certificate and baptism does not prove the child regularly goes to church."

It is not known how many non-religious pupils attend faith schools, but in 2009, of year seven admissions to St Richard Gwyn Catholic High School, more than half came from non-Catholic primary schools. The council estimates it can save £100,000.

But Terry Sanderson, president of the National Secular Society, said: "This proposal is the worst of all worlds. It is bad enough that the council provides free transport to denominational schools in the first place, but it is scandalous that there will now be a religion test. There will be children who live next door to each other who might be going to the same school – one can take the bus and the other, who hasn't been baptised into that particular faith, will have to make other arrangements. It is the absolute epitome of discrimination, and should be illegal."

"However the council organises this, it will mean discrimination for someone. Other councils around the country have already stopped this business of subsidising religion and discriminating against those who don't have it. Flintshire should follow their example," he said.

A 12-week public consultation period begins on January 7 before the plans are put to the cabinet for final approval on April 23. If given the go-ahead the changes are expected to come into effect by next September and will be introduced in a phased approach, as new pupils enrol.