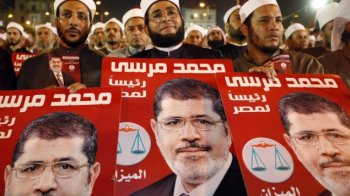 Egypt's newly-elected Coptic Christian pope said on Monday that he was alarmed at the overtly religious nature of the country's proposed new constitution. It is an indication that he intends to campaign with secular groups against the emphasis on Islam in the newly-formulated charter.

Pope Tawadros II expressed concern about the rise of militant Islamism in Egypt and the resulting violent attacks on churches as well as lethal assaults on worshippers. A rising number of court cases are being filed against Christians accusing them of blasphemy and disrespecting Islam.

But the new Pope is hopeful that things can improve. "This is changing bit by bit, and it will take time. It needs encouraging, and so long as society is fair, and democracy is built fairly, you will see participation [from the Copts]."

Egypt's Islamist President, also head of the Muslim Brotherhood, has said the constitution must be based on Islamic Shariah law, although it was not clear what that would entail. But together with the violence being directed against them, Coptic leaders are fearful that they will be subject to even greater persecution if the constitution in its present form is enacted.

"The constitution is for us all to live together, a common life, we need each other. This is the constitution that will bring us together," said Pope Tawadros. "Any additions or hints that make the constitution religious will not be acceptable, not only to Copts but to many sectors in society."

A young Coptic man is in prison facing charges of contempt of religion because he shared an anti-Islamic video on Facebook, while an Islamist broadcaster who faces similar charges for tearing up the Bible in public is not being held.

Meanwhile the authorities have been slow to react to the disappearance of a 14-year-old Christian girl said to have converted to Islam and married a Muslim in breach of laws setting a minimum age for both actions. Salafists have warned the government against handing her back to her family, saying that under Islamic law her actions are permissible. Such incidents leave Christians embittered, and deepen the faultlines in society.

Egypt's Coptic Christians have long complained of discrimination by the state and the country's Muslim majority. Clashes with Muslims have occasionally broken out, sparked by church construction, land disputes or Muslim-Christian love affairs.

The death of Arab secularism

The Pope and the President

As the campaign against relationships and sex education spreads and grows increasingly aggressive, Yasmin Rehman says politicians' pandering to intolerance will be a disaster for LGBT people, Muslims and...