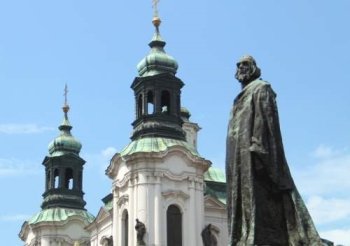 Czech MPs have voted by a narrow margin to let the Catholic Church reclaim properties seized during the 1940s and 1950s by the Communist regime. The amount involved is is £4.3 billion. Property was seized from the Catholic, Reformed, Brethren and Orthodox and Jewish communities.

The new law will also end the payment of clergy salaries by the state.

Under the new law, 56 per cent of church assets valued at £2.4billion are to be returned from January 2013, with £1.9 billion provided in compensation for the rest over a 30-year period, during which an annual government grant will be phased out. Assets belonging to the Catholic Church are thought to represent about 80 per cent of the total.

The Czech primate, Cardinal Dominik Duka, said the new arrangment would "benefit everyone", although how paying billions into the already bulging coffers of the Catholic Church while the country struggles with an economic downturn is to the benefit of everyone is not clear.

The Chairman of the non-Catholic Czech Ecumenical Council, Joel Rumi, said that losing state grants that funded clergy salaries posed a challenge, but it would help the church's image because they would be able to say that they no longer receive taxpayers' money.