BBC plan to ramp up the religion this Christmas 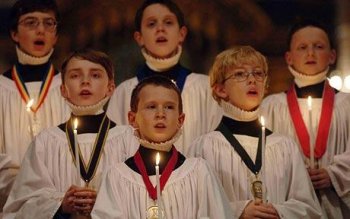 BBC Religious programming will go into overdrive this Christmas with the national broadcaster announcing copious amounts of "carols, festive music, contemplation, conversation and live worship across BBC Television and Radio."

In the week before Christmas the Archbishop of Canterbury Rowan Williams, the Head of the Catholic Church in England and Wales Vincent Nicholls and the former Archbishop of Westminster, Cardinal Cormac Murphy O'Connor, will all be given a platform to proselytize on BBC Radio Two's Pause for Thought.

The outgoing Archbishop of Canterbury will also offer his Thought for the Day on Radio Four's flagship news programme on 22 December and give a special interview to BBC Two offering "an exclusive insight into his emotions after 10 years in one of the toughest jobs in Britain." On New Year's Day BBC One will also broadcast the Archbishop of Canterbury's annual New Year's Message.

In December, BBC Two presents a three-part series about Westminster Abbey featuring interviews with members of the 250 staff who oversee the Abbey's spiritual mission. Viewers will also be treated to four special editions of Songs of Praise and plenty of 'live worship' from churches up and down the country.

The full rundown of the BBC's religious programming can be found on the BBC's website.

Aaqil Ahmed, Commissioning Editor Religion and Head of Religion & Ethics, says: "As we prepare for Christmas, it is befitting that Westminster Abbey is at the heart of our celebrations given its unique stature at the centre of national worship in this country."

Stephen Evans, campaigns manager at the National Secular Society, said: "Even by BBC standards, our national broadcaster appears to have gone a bit over the top this year.

"The BBC's duty as a taxpayer-funded public broadcaster is to serve the whole community and ensure all voices are heard, and that would include religious voices, but the disproportionate emphasis on the importance of religion in the life of the country is becoming something of a joke. Over the past fifty years there has been a dramatic drop in interest in religion – both in its influence and its practice – but the BBC's output remains as deferential and sycophantic as ever."

Meanwhile, the National Secular Society has given evidence to the BBC's impartiality review of its breadth of opinion. In a formal submission prepared by its president, the NSS accuses the BBC of a lack of impartiality when it comes to non-religious voices and of according religion a kind of fawning respect that no other section of society is granted.