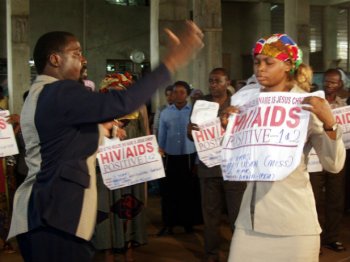 Leaders of some West African churches in the UK are pressuring patients infected with HIV to stop taking medication and instead trust in prayer and faith healing.

The scandal has been uncovered by the charity African Health Policy Network (AHPN) in a report (pdf) that will be published later this month.

Cases where patients were told to stop taking their anti-retroviral medication have been reported in churches in London, Manchester, Leeds and across the north-west.

The AHPN, which deals with health inequalities for the African population in the UK will call on the Government to do more to prevent religious leaders from encouraging HIV patients to stop taking life-preserving drugs. The charity says that although the churches play a big role in offering support and advice to people infected with HIV, some of them put too much emphasis on faith healing which can lead to a rapid deterioration in the health – both mental and physical – of those persuaded to give up medication.

The report says: "Faith leaders and churches can play a very positive role in the lives of people living with HIV/AIDS. They are often the first port of call and a source of support and hope. But in a few churches these practices exist and we want to work with faith leaders to monitor what is going on in churches around HIV...

"Whilst faith intersects positively with health as a source of spiritual guidance and hope for those living with long-term health conditions, faith and HIV can often interact negatively. Not only is the perpetuation of stigma something that must continue to be addressed by faith communities, but the issue of transactional faith 'healing' claims are harmful, life-threatening and should not be tolerated."