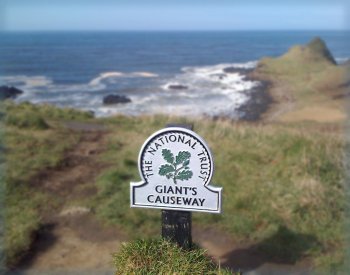 A freedom of Information response from the Department of Enterprise, Trade and Investment (DETI) in Northern Ireland suggests that the inclusion of a creationist exhibit at the Giant's Causeway visitor centre was a condition of the near £10 million that was given to the National Trust.

Following a public outcry, the National Trust recently amended an exhibit at its visitor centre which gave credence to the creationist perspective that the earth was created around 6000 years ago.

The FOI request was submitted by Alliance Party Councillor Andrew Muir. An email released to him by DETI dated 9 November 2009 states:

"I've amended draft to take on board NITB [Northern Ireland Tourist Board] comment re National Trust unwillingness to accept Creationism to be included in the exhibition, as a grant condition. Are you content for submission to be submitted?

Cllr Andrew Muir said: "Whilst I am grateful that Department for Enterprise, Trade and Investment have finally released the documents requested on 8 July 2012, I am disappointed information is so heavily redacted and strangely sparse. On the basis of the information provided some serious questions do however need to be answered by the Department.

"One of the released emails does suggest that under the current Minister, the Department of Enterprise tried to impose on the National Trust a requirement to include Creationism as a grant condition? Were any contractual obligations imposed upon the National Trust to meet the needs to creationist campaigners such as Caleb who openly admit to their DUP connections?

The National Secular Society have backed calls from Cllr Muir for the Department to clarify without delay the role played by previous and current Enterprise Ministers in relation to inclusion of Creationism within the new Giant's Causeway Centre.

Stephen Evans, Campaigns Manger at the National Secular Society said: "It's essential that we get full disclosure from the Government and Northern Ireland Tourist Board to get to the bottom of this issue. If Government Ministers are pursuing their personal agendas with public money the people of Northern Ireland need to know."

Peter Floyd, President of the Northern Ireland Secular Society commented, "There is history of senior DUP members insisting upon creationist representation in the public sphere. We have suspected that conditions were attached to the funding of the visitor centre and this evidence supports our suspicion. We will be monitoring the situation very closely as it is potentially illegal under the Belfast Agreement."

The Department of Enterprise, Trade and Investment, headed by DUP MLA Arlene Foster, has so far refused to comment. The National Trust has denied that it was pressurised to include creationist material in its Giant's Causeway visitor centre.

Read Background to the story here