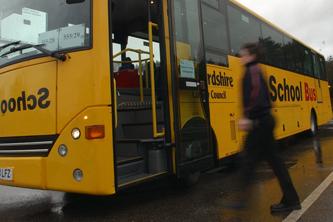 Northumberland County Council has agreed to reconsider its policy of segregating children by religion on its school buses.

Responding to pressure from parents, the council has said it will arrange meetings with parents to explore the issue and listen to their concerns.

Parents of students at Bedlington's St Benet Biscop Catholic High School have launched a petition protesting against the decision – branded a form of religious apartheid – to run separate buses for Catholic and non-Catholic youngsters.

Coun Simon Reed, of Bothal in Ashington, told the local News Post Leader newspaper: "We recognise the concerns expressed by some parents which are an unintended consequence of a routine review of school transport arrangements.

"We will be talking to St Benet Biscop Catholic High School to explore the possibility of working together on alternative transport arrangements for both eligible and non-eligible children, to begin in January.

"Any revised arrangements must comply with council policy on circumstances whereby children can qualify for free transport, which is normally based on distance from school, but also includes faith or low income."

Before the policy was introduced, children at the Catholic schools had been able to share buses with their peers, but new regulations brought into force this term mean that separate buses are now run for pupils of different faiths. The three buses are believed to be costing the council more than £90,000 a year minus the income generated by fares paid by non-Catholic students using them.

Keith Porteous Wood, Executive Director of the National Secular Society, said: "All children in the area should receive the same treatment regardless of their religion. If some are having their transport costs met, then they all should. Favouring those children whose parents claim a particular faith is discrimination of the worst kind."