Boy, 11, excluded from Scouts because he doesn’t believe in God 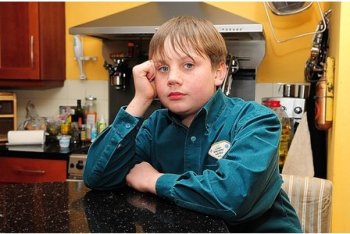 An 11-year old boy from Midsomer Norton, near Bath, Somerset, has been told he cannot join his local Scout troop because he does not believe in God and doesn't want to make the Scout Promise in its present form. This requires Scouts to "do their duty by God and the Queen".

George Pratt has been attending the troop that meets opposite his home for the past ten months and was then asked if he wanted to be "invested" into the group. But his strong atheistic views became apparent when Scout leaders were discussing the Promise. He was told, in view of his atheism, that he would not be able to join or continue attending meetings.

George's father, Nick, told the Western Mail: "As a family we neither promote nor dismiss any religion and hold no firm views on God in any form, and have always let our children make up their own minds as and when they feel they can make an informed choice. George had the guts to stand up and admit his view and I believe the Scouts are being narrow-minded when we are supposed to be tolerant."

Mr Pratt continued: "To be invested into the Scouts you have to believe in a God, it does not say which religion that God is from, so you can be Muslim or Buddhist, but if you have the courage to stand up and admit that you do not believe in any God then look out because you are not welcome into the Scout community. This is regardless of the fact that you are sensitive, generous, kind and genuinely a good person."

Assistant director of media relations for the Scout Movement, Simon Carter, told the paper: "All young people are required to make the Scout Promise if they wish to become a Scout. Variations of the Scout Promise are available for different faiths (such as the use of 'Allah' to replace 'God' for Muslim Scouts), however all the variations of the Promise recognise the 'Duty to God' element. Young people are required to show both an understanding (relevant to their age) and an acceptance of the promise before they become a member.

"Young people will not be refused membership solely because of their parents' beliefs or non-beliefs, however they are required to make the promise as outlined above.

"Furthermore, Scouting accepts that as they grow into independent adults, some young people may question or doubt the existence of God as they develop their personal spiritual understanding. Scouting believes that young people going through this process should be able to remain a Scout."

Earlier this year the NSS wrote to Chief Scout Bear Grylls urging him to support calls to open up scouting to all young people after he asserted in the media that scouting was for everyone regardless of their religion, ethnicity or belief.

Terry Sanderson, President of the National Secular Society, said: "The NSS has challenged the Scouting Association on several occasions over the exclusion of the non-religious, and have been rebuffed each time. They are exempt from the Equality Act so there can be no legal challenge against this blatant religious discrimination.

"We hope that cases like George Pratt will cause the movement to rethink its rather hard-hearted policies and make room for the increasing number of young people who cannot, in good conscience, swear that they are believers."