Another “Christian B&B” fined for turning away gay couple 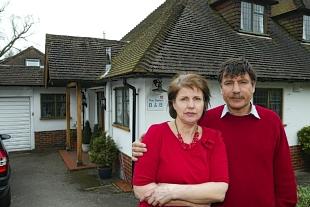 A gay couple have successfully sued the owner of bed and breakfast accommodation in Berkshire after she refused to let them stay in a double room because of her religious views.

Michael Black, 64, and partner John Morgan, 59, sought damages from Susanne Wilkinson after she declined to let them have the room at the Swiss Bed and Breakfast in Cookham in March 2010. Both men were awarded £1,800 in damages.

Lawyers from Liberty, the human rights organisation which has taken up the case, argued that under legal regulations it was unlawful for a person concerned with the provision of services to the public to discriminate against a person on the grounds of that person's sexual orientation.

Lawyers for Mrs Wilkinson had argued that a person offering bed and breakfast in their own home was entitled to refuse to permit people who were not married or in a civil partnership to share a double bed.

The judge also made clear that, even if she had not found direct discrimination, she would have found that the B&B owner's professed policy of only giving double rooms to married couples was indirectly discriminatory.

The judge dismissed the owner's argument that she had not acted in a discriminatory way because she objected to homosexual sexual behaviour rather than homosexual sexual orientation. It was also found that, although the refusal of a room could be seen as a manifestation of the owner's religious beliefs, her right to manifest these beliefs was not unfairly limited by the Equality Act - which requires that service providers do not discriminate on grounds of sexual orientation.

Mrs Wilkinson said: "Naturally, my husband and I are disappointed to have lost the case and to have been ordered to pay £3,600 in damages for injury to feelings. We have the option to appeal, and we will give that serious consideration. We believe a person should be free to act upon their sincere beliefs about marriage under their own roof without living in fear of the law. Equality laws have gone too far when they start to intrude into a family home.

"People's beliefs about marriage are coming under increasing attack, and I am concerned about people's freedom to speak and act upon these beliefs. I am a Christian, not just on a Sunday in church, but in every area of my life – as Jesus expects from his followers. That's all I was trying to do and I think it's quite wrong to punish me for that, especially after enduring over two years of vile abuse and threats. We find this a strange justice in a society that aspires to be increasingly tolerant."

Terry Sanderson, President of the National Secular Society, said: "This idea that you can set up a business in your own home and then disregard the law is one that is common among Christians. You don't normally charge visitors who stay with you as friends or invited guests. Does she also expect to be exempt from health and safety laws, hygiene regulations and so on?"

Mr Sanderson said that anyone who runs a business open to the public must obey the law, wherever that business is conducted. He commented: "I don't think these complaining Christians have any idea of how humiliating it is to be turned away in such a manner from a service that is available to everyone else. What if someone opened as Bed and Breakfast and decided it was against their religion to have Christians in the house – would they be happy with that?"

James Welch, legal director of Liberty, said: "Hopefully today's ruling signals the death knell of such 'no gays' policies – policies that would never be tolerated if they referred to a person's race, gender or religion."