Pickles wrong to assign a ‘Christian ethos’ to Britain 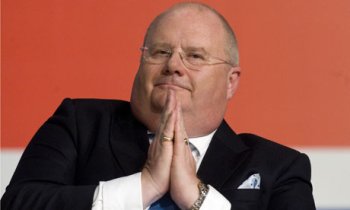 Communities Secretary Eric Pickles has surpassed himself in an opinion piece for the Telegraph headed A Christian ethos strengthens our nation: Religion shaped the modern British state, and this Government is proud to 'do God'.

He asserts that "we are a Christian nation – and should not be afraid to say so". Can this ardent Christian have failed to notice that Christian affiliation and church attendance have been in continuing decline for nearly a century? The BBC has let slip that the latest social attitudes survey shows half the nation now says it has no religion, and among young people the figure is even higher. And there is no sign of that decline halting. In such a tub thumping piece, not to even acknowledge this scenario is disingenuous, to say the least.

He also tells us that moral leadership is offered by Christian leaders. It may be offered, but it certainly isn't taken; polls show that the clergy are practically the last people that those seeking moral leadership turn to.

And what a wonderful example we have had of moral leadership over same-sex marriage. The church vilifying homosexuals and the Anglicans seeking to justify their bigotry with a dishonest and self-serving submission to the Government Equality Office. And these Christian leaders are not only seeking to deny secular same-sex marriage – with no religious input at all - but they are opposing the possibility of optional same-sex religious marriage to liberal religious organisations who are anxious to have it. Polls show that those in the pews would also like the church to lighten up on this.

And then we learn that faith communities provide a "clear moral compass". We do not suggest that many people of faith are not moral, but they certainly don't have a monopoly of morality, and the clear implication is that those outside the faith communities are not moral, or certainly not to the same extent. That is a wholly inappropriate statement for the Secretary of State for Communities to make. And many will be concerned that "clear" is a euphemism for bigoted and doctrinaire.

And that brings us to the Coalition having an explicit "integration" strategy to bring communities together. To be fair, the Blair and Brown governments also emphasised religion, and addressed citizens primarily as a religious entities – for example in segregated schools or in community work. The idea that dwelling on the very issue that divides us most– religion – somehow brings communities together is the biggest lie peddled by these governments, and motivated by an obsession with promoting religion at any cost.

Having bashed the religious drum, Mr Pickles then turns his sights on secularism, which he cannot refer to without first adding a pejorative adjective, and indeed cannot mention without misrepresenting.

One of his two major beefs with the National Secular Society is our intervention at the European Court of Human Rights supporting the decisions of the UK courts in rejecting the claims of two workers wearing crucifixes. To his credit, he does acknowledge that our action is in support of his own Government and its position. According to Mr Pickles the government's position "should not be misinterpreted as supporting secularism: rather, we are resisting Brussels interference and gold-plating of what should be a matter for common sense." Could it just be that secularism and common sense have led us both to the same conclusion?

Clearly implying that these were the issues in the crucifix cases, Mr Pickles informs his readers that "Banning discreet religious symbols for reasons of political correctness is not acceptable. We should challenge the nonsense that religious displays could "cause offence" and therefore should be hidden from view?" He certainly doesn't let the facts stand in the way. The cases were not about banning any crosses or crucifixes; there is no ban on crosses or crucifixes, political correctness did not come into it and no one suggested that causing offence played any part in the courts' decisions. The cases were about health and safety and jewellery, and the very considerable attempts by the employers to accommodate the employees were repeatedly rebuffed. They became even more obdurate as soon as their religious litigant helpmates at the Christian Legal Centre and Christian Institute came onto the scene.

Mr Pickles' other major bone of contention with the NSS (in his words the "intolerant" NSS) is the court case we won on Council prayers. He characterises this among the "long-standing British liberties of freedom of religion have been undermined in recent years by aggressive secularism".

All the National Secular Society did was ask the High Court to make a decision. But he is careful not to remind readers that the NSS made clear both before taking action and in the High Court that it was perfectly happy with (optional) prayers being said before Council meetings or a period of silent contemplation during them. That does not restrict anyone's freedom of religion, the manifestation of which under human rights charters is a relative not absolute freedom – so it needs to be balanced with the rights of others, for example the non-religious going about their democratic business.

He claims to have changed the law to "safeguard and entrench the right of councillors to pray at the start of council meetings should they wish". Not necessarily so. It is the function of the courts, not Ministers, to interpret the law. Ministers have no power to reverse court rulings, and this Act of Parliament he refers to, the Localism Act, makes no specific mention of council prayers and received Royal assent before the judicial review was heard by the High Court.

In saying equality laws must not reduce established religion to the equivalent status of any other belief, Eric Pickles is clearly advocating a state where Christianity is privileged above all other beliefs, including non belief. Such opposition to a modern secular democracy undermines British liberties in exactly the way he accuses 'militant secularism' of doing.

It beggars belief that the Minister asserts that "Christians also have the right to be heard by policy-makers", as if Christians were routinely ignored and downtrodden. Mr Pickles speaks as a minister of the only country in the world to give bishops the right to sit in its Parliament, and of the only country in the world where daily prayers (overwhelmingly Christian) are mandatory in every school in the land.