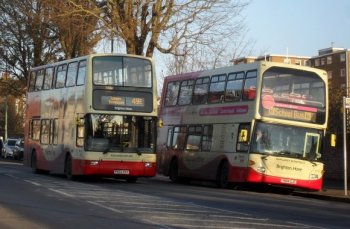 Northumberland County Council has introduced a new policy for school buses in which Catholic children get a free (and separate) bus to the local Catholic schools while non-Catholics attending the same schools have to pay (and go on another bus).

The scheme is costing the council £90,000 a year (less fares from non-Catholic children) and has been widely condemned by parents and teachers alike.

The policy was described as "apartheid" by one parent, Cherie Nelson, who hails originally from South Africa. She said she would try to get the council's decision overturned by the Equality and Human Rights Commission.

Con Todd, Headteacher at Bedlington's St Benet Biscop Catholic High School said the school had asked the Council not to do this and was disappointed that Catholic and non-Catholic children were being separated.

Previously, children at the school had been able to share buses with their peers, but the new regulations mean that separate buses are now run for pupils of different faiths.

Keith Porteous Wood, executive director of theNational Secular Society, said the council should not be subsidising school transport on a sectarian basis in the first place.

Mr Wood said: "Parents in Northumberland have suddenly woken up to the fact that school transport is a hotbed of separatism and religious discrimination. We have been saying for years that it is iniquitous that the taxpayer should be funding transport to religious schools for religious families much more generously than that to any schools for non-religious families. It is religious discrimination of the worst and most despicable kind – the sort that keeps children apart and creates needless differences between them."

Mr Wood said that all over the country local authorities were ditching these school transport subsidies because of budget cuts.

"It is a shame that so many councils are stopping this discrimination only because they can't afford it any more. They should be doing it on the more principled grounds of equality. But, whatever the reason, it is ending an injustice. Northumberland Council should do the same."