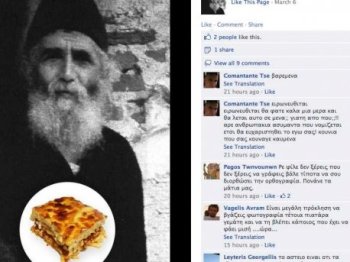 A man in Greece has been charged with blasphemy after he made fun of a revered monk on his Facebook page. It is thought the arrest was brought due to agitation from the right-wing Golden Dawn political party.

Police allege the unnamed 27-year-old set up a Facebook page referring to the late Elder Paisios by the mocking name Geron Pastitsios, which is a Greek pasta and beef dish. In a screenshot of the Facebook page, which has now been removed from the social network, the monk is shown with a plate of pastitsios in front of him. The monk, who died in 1970, has a large cult following who believe he had some kind of prophetic power.

The suspect was arrested and his laptop confiscated on the island of Evia at the weekend. Police said that his computer contained "blasphemy" against the dead monk and against Orthodox Christianity in general.

He faces a possible prison sentence or a fine of €3,000 under Greece's strict blasphemy laws.

'Remind me again, which country gave rise to (ancient Greek satirist) Aristophanes?' one user posted on Twitter, while others compared Greece to Iran and Saudi Arabia.

Sign the petition calling for the release of the Facebook "blasphemer" and for the abolition of blasphemy law in Greece.