Request that teachers at Catholic schools make “declaration of faith” is McCarthyite and threatening, says NSS 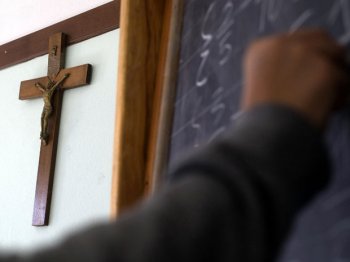 A request that teachers at Catholic schools in the diocese of Lancaster make a "public profession of their faith" has been condemned as discriminatory and McCarthyite by the National Secular Society.

The request from Bishop Michael Campbell, sent to priests in the diocese, says that "the purpose of the initiative is to receive from foundation governors, teachers and other educators in the diocese, a public profession of faith during a solemn mass."

Although the letter from the bishop says it is "an invitation not an imposition" there are fears among some schools that those who don't comply might face consequences.

Terry Sanderson, President of the National Secular Society, said that the bishop's letter could be perceived as a test of suitability to teach in a Catholic school. Those who don't comply may be fearful that their career will suffer.

"Although the bishop is trying to offer reassurance that this is all optional, there is a suspicion that those Catholic teachers who choose not to participate may later find that there are consequences for their choice. There is a flavour of McCarthyism about it – they don't just take your word that you're a proper Catholic, you have to prove it to them."

Mr Sanderson said that people whose wages were paid by public money should not be subjected to such tests. "There are teachers of other denominations and religions and no religion working in Catholic schools. Will the fact that they can't – or won't – make such a declaration have any effect on their careers? These people are employed to teach children, not to have their religious loyalty questioned, tested and scrutinised. Is the church trying to weed out those who might not be entirely in tune with current Catholic teaching? According to the latest polls most Catholics don't agree with the Church's teachings on contraception, abortion or homosexuality, and there is no reason why teachers should be any different."

Mr Sanderson said it was interesting that the initiative was part of The Year of Faith, which seeks to promote 'New Evangelism'. "Is the bishop trying to ensure that he gets the right kind of teachers – the ones who will use their access to children to evangelise as much as to teach?"