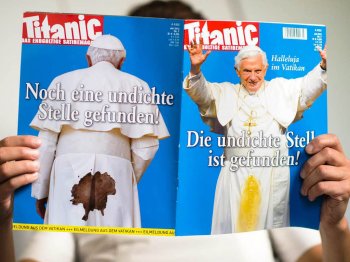 The small German magazine Titanic is being prosecuted by the Pope over the cover of its latest edition which satirises the "Vatileaks" scandal.

The front and back covers of the current issue of the magazine — which show the pope with a yellow stain on his cassock and the headline "The Leak Has Been Found" — are "illegal and harm the holy father's legal rights", says Matthias Kopp, spokesperson for the German Bishops' Conference. "Titanic oversteps every measure of decency," he says.

On Tuesday, a state court in Hamburg issued a temporary injunction against the magazine. The issue has been withdrawn from circulation and the magazine has been forbidden from publishing it on the internet.

The magazine published on its home page a copy of a letter sent by Archbishop Angelo Becciu to a German lawyer in Benedict's name asking him to take "the necessary legal steps against this publication".

"The Holy Father tasks you to institute proceedings against this violation of his personal rights," the letter added.

The magazine's editor Leo Fischer said in a statement:"Benedict must have misunderstood us." He said the cover showed a Pope who had accidentally spilled a soft drink over his cassock in his exuberance. He said that the magazine will fight the ban.

Terry Sanderson, President of the National Secular Society, said: "It is almost unbelievable that a court in a developed Western nation should think it legitimate to go along with the Vatican's authoritarian tendencies and suppress a rather mild satire like this.

"The Vatican comes over once again as a humourless, controlling dictatorship that will brook no criticism. This crazy case will simply draw ever more attention to the things it is trying to cover up. The Pope seems to think that we are still living in the 15th century when deference to his office was expected – whatever outrage was committed.

"So, in the cause of free speech, and at the risk of being burned at the stake, we are publishing the photo here and ask you to read this article about the Vatileaks scandal that the Holy See would rather you didn't know about."

Vatileaks scandal exposes the secrets of the Pope's corrupt empire

Find out more about our campaign for freedom of speech